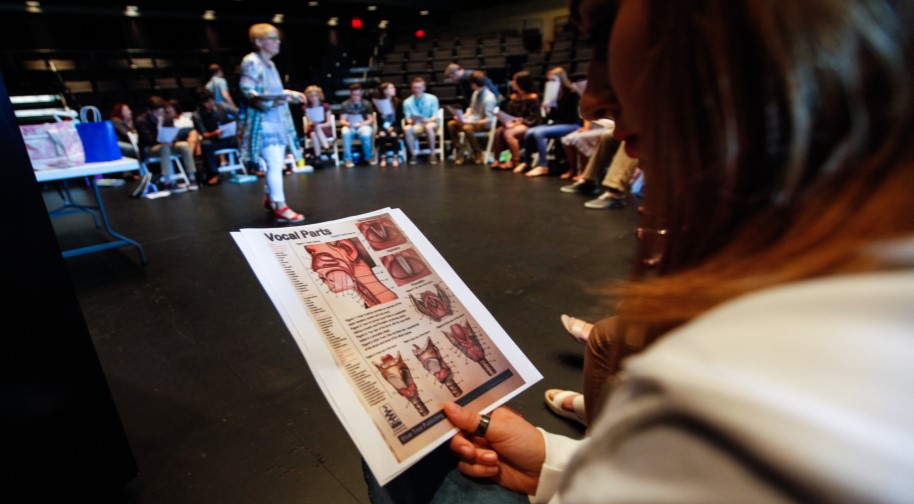 The 2021 Songbook Academy® Summer Intensive (the “Academy”) is sponsored by the Great American Songbook Foundation, Inc. (“Sponsor”) headquartered at One Carter Green, Carmel, Indiana 46032. The Academy provides an opportunity for young people to experience firsthand the American collection of popular music from Broadway and Hollywood musicals and the Tin Pan Alley era prevalent from the 1920s to 1960s (hereinafter referred to as the “Great American Songbook”).

Who May Apply: The Academy is open to individuals between 14 and 18 years old as of Jan. 1, 2020 who are enrolled in high school (or home school) grades 9-12 and are U.S. legal residents residing in any one of the fifty United States. Applicants may be required to provide proof of date of birth, high school enrollment and residency, upon request.

Employees of Sponsor and Sponsor’s parent entities, affiliates, subsidiaries, including any vendors providing services in connection with the Academy, distributors and advertising and promotion agencies are not eligible to participate in the Academy. Any Family Member and Household Member of such employees are also not eligible to participate in the Academy. For purposes of these Program Guidelines, “Family Member” means a parent, child, sibling or spouse, and “Household Member” means persons who live in the same household as such employees whether related or not.

How to Apply: To submit an Application, visit app.getacceptd.com/songbookacademy. Applications to the Academy consist of an online application, a color photo of Applicant, video recordings of two (2) contrasting songs from the era of music referred to as the Great American Songbook (American music written between the 1920's and 1960's), and a non-refundable assessment fee of Eighty Dollars ($80.00) (sometimes hereinafter referred to individually, as an “Application”, and collectively, as “Applications”). All Application materials will be submitted via the Acceptd platform.

For purposes of these Program Guidelines, “receipt” of an Application occurs when the Sponsor’s servers record the Application information resulting in an Application being received. All Applications must be submitted electronically. Applications become the property of Sponsor. An Applicant meeting the applicable requirements set forth above may only submit one (1) Application.

By submitting an Application, each Applicant agrees to these Program Guidelines and certifies that his or her Application complies with all requirements set out in the Program Guidelines. Applicant represents that the Application is original and all rights thereto are owned entirely by the Applicant and the Application does not infringe the intellectual property rights of any third party. Sponsor reserves the right to disqualify any Application for any reason in its sole and absolute discretion. In the event it is determined that an Applicant has not complied with these Program Rules, has failed to execute and return any required documents within the specified time period or has made false statements, Applicant will be disqualified at Sponsor’s sole discretion.

Program Fee: If selected to participate in the Academy, a non-refundable Program Fee of $900.00 is due on or before May 10, 2021. The Program Fee includes:

The Program Fee does not include travel expenses to and from Carmel, Indiana, for the Academy Week.

Selection of Songbook Academy® Participants: Each qualifying Application received by the announced deadline will be judged by a panel of qualified judges, comprised of music industry professionals and educators. Each qualifying Applicant will receive written feedback from the judges on their two (2) song submission. The judges will select forty (40) Applicants (“Selected Applicants”) to be invited to participate in the Songbook Academy. Selected Applicants will be notified by phone, mail and/or email on or before April 15, 2021. If a Selected Applicant cannot be reached after five (5) days from the first notification attempt, his or her Application will be deemed ineligible.

Academy Format: The Selected Applicants will participate in the Songbook Academy® (as “Academy Students”), which requires attendance and participation in a seven (7) day Academy (“Academy Week”) on interpreting and performing the music of the Great American Songbook at the Sponsor’s headquarters in Carmel, Indiana, July 17-24, 2021. Each Academy Participant must pay the Program Fee, attend all workshops, classes, rehearsals and performance events during the Academy Week. Academy Week will conclude with a Final Performance in the 1,600 seat Palladium Concert Hall at the Center for the Performing Arts in Carmel, Indiana.

Awards and Recognition: Each Academy participant will receive Songbook Scholar recognition, a college letter of recommendation, a recognition letter sent to his or her high school and a lifetime membership in the Academy alumni network. During Academy Week, ten (10) Academy Participants will be selected to perform as soloists at the Final Performance. The ten (10) soloists will be selected based on educator evaluations throughout Academy Week. Immediately following the Final Performance, a panel of judges will select a Great American Songbook Youth Ambassador and a Songbook Inspiration Award and Songbook Celebration Award winner.

Judging: Applications and Final Performances will be judged by a panel of qualified judges comprised of music industry professionals and educators, and will be judged based upon the following criteria: (i) intonation; (ii) diction; (iii) phrasing; (iv) rhythm; and (v) song interpretation. Ties will be broken based on the judges’ sole discretion. Judges’ decisions during the Application process and the Final Performance are final and binding.

Limitation of Liability: Sponsor and its respective directors, officers, employees, agents and representatives (collectively, “Released Parties”) are not responsible for lost, late, misdirected, damaged, stolen, altered, garbled, incorrect, incomplete or delayed Applications; all of which will be void. Released Parties are also not responsible for problems related to technical malfunctions of electronic equipment, computer online systems, servers, or providers, computer hardware or software failures, phone lines, failure of any Application to be received by Sponsor on account of technical problems, traffic congestion on the Internet or the website, or for any other technical problems including telecommunication, miscommunication or failure, and failed, lost, delayed, incomplete, garbled, or misdirected communications which may limit an Applicant’s ability to apply to the Academy. Released Parties are not responsible for any damage to an Applicant’s computer system as a result of submitting an Application. Released Parties are not responsible for any other errors or malfunctions of any kind, whether computer network, printing, typographical, human or otherwise relating to or in connection with the Academy, including, without limitation, errors or malfunctions which may occur in connection with the administration of the Academy, the processing or judging of Applications, or in any Academy-related materials. In the event of a dispute regarding Applications received from multiple users having the same email account, the authorized subscriber of the email account at the time of Application will be deemed to be the Applicant and must comply with these Program Guidelines. An “authorized subscriber” is the natural person who is assigned the email address by the Internet Service Provider, online service provider, or other organization responsible for assigning email addresses.

By participating in the Academy, Applicant agrees to release, indemnify and hold harmless the Released Parties from all liability, claims, actions, proceedings, losses, injuries and damages to person(s), including death and property. In no event will the Released Parties be responsible or liable for any damages or losses of any kind, including direct, indirect, incidental, consequential, or punitive damages arising out of submitting an Application or participation in the Academy.

Assignment Of Rights And Release Forms: Except where prohibited by law, Applicant hereby acknowledges that his or her Application constitutes consent and agreement to the recording and use of Application materials, performances, appearances, name, voice, singing voice, likeness and any musical or sound effects produced by Applicant or Sponsor for use in connection with any television program, promotion or the Internet for all purposes, including, but not limited to, advertising, marketing, promotion, merchandising and the exploitation of any and all ancillary and subsidiary rights, as the same may be edited, in all media now known or hereafter created, throughout the universe, in perpetuity for no compensation, unless otherwise required by law. A Selected Applicant and his or her parent or guardian must execute, notarize and return within five (5) days receipt a liability release, a publicity release (where legal) and any other documentation that Sponsor requires, including, without limitation, an Affidavit of Eligibility and Enrollment Form and Waiver. If selected Ambassador, Applicant must complete and return in a timely fashion the Ambassador Agreement furnished by Sponsor that will include release forms and waivers for review and signature by Ambassador or his and/or her guardian.

Jurisdiction & Choice Of Law: By submitting an Application, Applicant agrees that the Academy is governed by the laws of the State of Indiana, and any suit, proceeding, or claim related to the Academy shall be heard in the courts of Hamilton County, Indiana, or the United States District Court, Southern District of Indiana, Indianapolis Division only, and that such courts are the appropriate venue for and have jurisdiction over any such suit, proceeding, or claim.