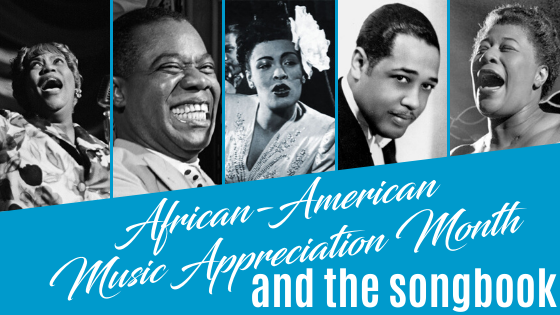 African-American Music Appreciation Month was first established as a National month of observance on June 7th, 1979 by President Jimmy Carter. As the Smithsonian Institute eloquently summarized: "It celebrates the African American musical influences that comprise an essential part of our nation's treasured cultural heritage."

The National Museum of African American Music (NMAAM) is a national advocate for Black Music Month and its staff has provided this snapshot of the movement's history:

In 1956, Ella Fitzgerald started a monumental project to sing the canon of the most important and influential American popular songs and jazz standards from the early 20th century.

Featuring definitive versions of classic songs including "I Got Rhythm", "Something's Gotta Give," and "The Lady is a Tramp," the Ella Fitzgerald Song Book records are a timeless masterpiece.

See the Great American Songbook Foundation's virtual exhibit: Ella Sings the Songbook and listen to each album in its entirety in our Spotify links. 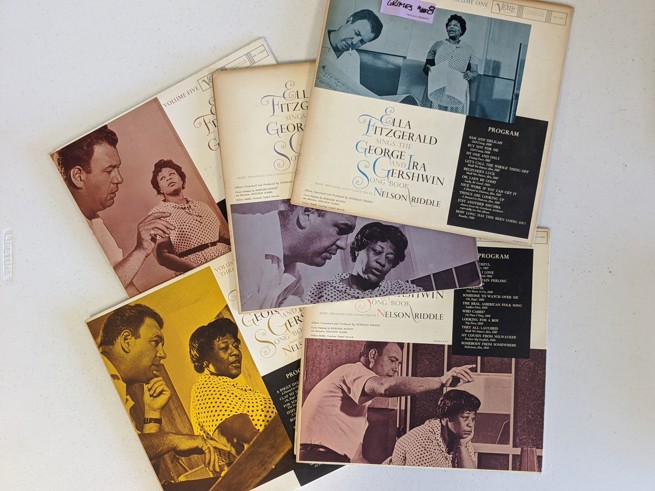 Image description: These albums are from the Great American Songbook Foundation's Archives & Collections. They are the complete recordings of the George and Ira Gershwin Songbook. Sung by Ella Fitzgerald and arranged and conducted by Nelson Riddle.

Duke Ellington was one of the most important creative forces in the music of the twentieth century. Although widely considered to have been a pivotal figure in the history of jazz, Ellington embraced the phrase "beyond category" as a liberating principle and referred to his music as part of the more general category of American Music rather than to a musical genre such as jazz. His influence on classical music, popular music, and, of course, jazz, simply cannot be overstated.

Here are 5 reasons why Duke Ellington is one of the most important jazzmen of the 20th century from france musique.

Holiday’s rendition of “Strange Fruit” was a radical act of rebellion when she performed it for the first time at the Café Society — “The Wrong Place for the Right People”. Holiday had specific instructions to set the mood for the unsettling piece: it was always the last song in the set, there would be absolute silence, no bar service and the lights would be dimmed save for a single spotlight on Holiday’s face as she sang the hauntingly chilling opening line:

Blood on the leaves and blood at the roots

“Strange Fruit” was met with animosity from racist hecklers at shows, radio programs who blacklisted her music, and her own record label, Columbia Records, refused to record it. Ahmet Ertegun, who later co-founded Atlantic Records, called it “a declaration of war … the beginning of the civil rights movement”.

Today “Strange Fruit” has been honored with two major recognitions which have immortalized it as a song of great significance to the musical heritage of the U.S. In 1999, “Strange Fruit”, was named the “Song of the Century” by Time Magazine, and in 2002 it was added to the National Registry of the Library of Congress.

"Louis Armstrong found freedom in his music in a way that he couldn’t see it as an American citizen. He couldn’t vote, he couldn’t walk in the front door in some places, but he sure could play something” - Scotty Barnhart (Associate Professor of Jazz Studies at Florida State University and Director of the Legendary Count Basie Orchestra).

One of this country’s first black superstars, trumpet player Louis Armstrong had an immeasurable influence on jazz, popular music, pop culture and race relations. He transformed jazz with his powerful solo trumpet, which was at once musically advanced, soulful, rich and irresistible. And as the first virtuoso on his instrument, he also changed popular attitudes toward the value of this African-American art form.

Known as the "Godmother of Rock 'n Roll", Sister Rosetta Tharpe was a talented electric guitarist, who combined blues, jazz, and boogie-woogie into a loud, flamboyant, virtuoso style that only later would be called “rock and roll”. Her innovative sound and use of electric guitar inspired artists like Elvis Presley and Little Richard's sound.

While Tharpe has historically been overlooked in rock 'n' roll history, she has, in recent years, been rightfully celebrated as a woman who broke every norm, and has a central place in the Turning the Tables canon. She was a gospel singer at heart who became a celebrity by forging a new path musically, a queer woman who toured with her partner and a fearless black artist who was in love with crafting a new sound.