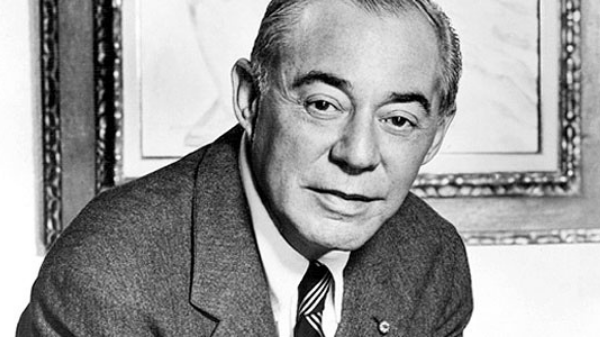 For two decades, Richard Rodgers (1902-1979) wrote songs in an exclusive partnership with Lorenz Hart (1895-1943).  With Hart’s decline and untimely death in 1943, Rodgers commenced the collaborating with Oscar Hammerstein (1895-1960) that produced five landmark Broadway musicals and an Oscar-winning Hollywood movie.  Working with Hart, Rodgers had written the music first.  With Hammerstein, the order was reversed.  And where Rodgers and Hart set store by irony and wit (rhyming “romance” with “those ants that invaded my pants” in “Bewitched, Bothered, and Bewildered”), the later partnership favored the full-throated sentiment of “If I Loved You” and “Some Enchanted Evening.”

Rodgers and Hammerstein were the blue-chip brand on Broadway from Oklahoma! in 1943 through The Sound of Music in 1959.  It surprises people to learn that Oklahoma! was written by two New Yorkers who had never been to that state but had a gloriously optimistic vision to share.  Rodgers and Hammerstein created an Oklahoma of the imagination to counter the grim images of uprooted Okies fleeing the “dust bowl” in the Great Depression.  “The Surrey with the Fringe on Top” may sound like cowboy music but is entirely the product of Rodgers’ imagination.

A musical in the “integrated” manner of Show Boat, Oklahoma! began its record-breaking Broadway run on March 31, 1943, to the strains of one of Rodgers’ signature waltzes, “Oh, What a Beautiful Morning.”  Characteristically, Hammerstein had spent weeks on the lyric before showing it to Rodgers, who marched to the piano and wrote the tune in a matter of minutes.  With the nation in a global war, the “bright golden haze on the meadow” struck a blow for American democracy.  As the chorus sings in the title song, “We know we belong to the land, / And the land we belong to is grand.”

It may be that, of the works in the Rodgers and Hammerstein canon, Carousel has the finest music. The opening waltz alone confirms Rodgers as America’s “waltz king,” the successor to Kern as Broadway’s supreme melodist.  Oklahoma! has always been the most popular of the shows, long a beloved staple of summer stock and summer camp.  The Sound of Music strikes some as saccharine, and yet one of Julie Andrews’ songs did double duty as a John Coltrane jazz classic, “My Favorite Things.”  The King and I boasts the superb theatrical sequence culminating in the polka “Shall We Dance?”  The movie State Fair has “It Might As Well Be Spring,” Hammerstein at his most lyrically wistful.

But the greatest Rodgers and Hammerstein collaboration may have been South Pacific, which was the hottest ticket when it opened on Broadway in 1949 with opera singer Ezio Pinza and theater legend Mary Martin as the leads—and again in a Lincoln Center revival in 2008.  The integration of a brilliant score with a coherent plot—and one with noble aims—reached its apotheosis in South Pacific.  In parallel love affairs, racial prejudice stands as the main obstacle in the path of true love.  The score ranges from the comic (“There Is Nothing Like a Dame”) to the romantic sublime (“Some Enchanted Evening”).  Set on an island in the Pacific theater during World War II, where the world is divided between friend and foe, sailor and nurse, officer and enlisted man, naïve Americans (‘corny as Kansas in August’) and exotic natives (“Bali Ha’i”), it is the most theatrical of musicals, the most musical of serious plays.  Whoever would understand American in the middle of the twentieth century must see South Pacific.

''Mr. Rodgers never did live along Tin Pan Alley; he was lost at sea as a boy and, when rescued, kept hearing inappropriate sounds. They remain inappropriately perfect.'' – Walter Kerr

Day and Night: Rodgers and Hammerstein -

and Lorenz Hart, and discusses how music has influenced his life. 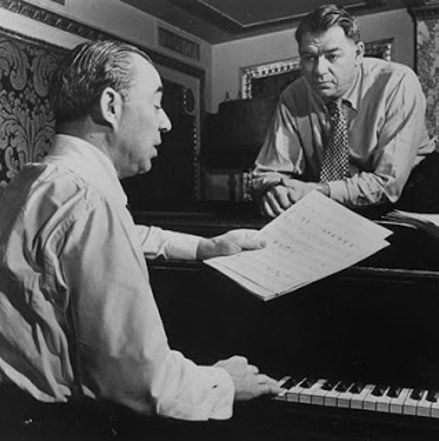 "The impact of Rodgers’ career—which is truly tantamount to two full careers— profoundly changed the course of American musical theater throughout the 20th century. With Hammerstein and Hart he created a tradition and standard which has rarely been achieved since, and against which all subsequent musicals have been measured. As Sheridan Morley wrote, the songs and shows of Richard Rodgers were built to last: 'He was a carpenter who believed in craftsmanship above all else, and frequently drew his musical inspiration from deep in the soil of his native America. If a line can be traced from Aaron Copland, whose Rodeo led Rodgers to the discovery of the choreographer Agnes de Mille and Oklahoma!, then in some curious way it stops again at Rodgers.' And as Alec Wilder wrote, 'Legend has it that somewhere amongst the many radio stations of the United States, a song by Richard Rodgers may be heard at any time, day or night, the year round. Well, I, for one, hope this is so.'"
— By Paul Zollo