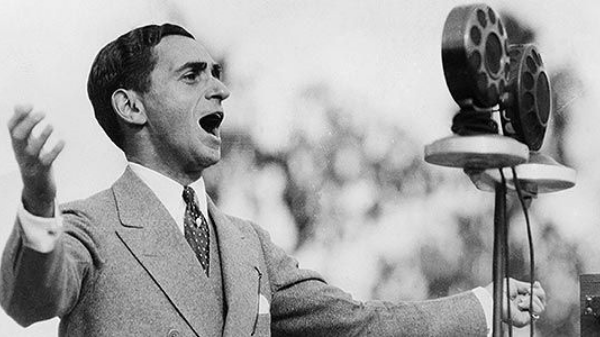 Jerome Kern was asked to define Irving Berlin’s place in American music.  “Irving Berlin has no place in American music,” Kern replied.  “Irving Berlin is American music.”  Berlin, who had no formal music training and could play piano in only one key, told people that his earliest memory was of shivering in a blanket on the side of a road when he was four or five years old and watching his home burn down in a pogrom. Berlin (1888-1989) began his New York musical career as a busker (performing songs for tips) and a singing waiter in a Chinatown restaurant.  He proved himself the most versatile of songwriters—one of the very few who wrote both the music and the words and was equally adroit at both.

Able to state his themes directly and without artifice, Irving Berlin wrote modern anthems.  In “White Christmas” and “Easter Parade,” he secularized the two most important Christian holidays.  While the songs are full of sentiment and may be sung with piety, what they truly celebrate is a nondenominational American religion.  In a riff in his novel Operation Shylock,Philip Roth exclaims that Berlin, “The greatest Diasporist of all,” turns Easter into a fashion show (“O, I could write a sonnet / About your Easter bonnet”) and Christmas into a snow holiday on the home front in the bitter December of 1942.  “This is Jewish genius on a par with the Ten Commandments,” Roth writes.  The riff ends with a hearty endorsement of another “Jewish” Christmas song, this one by Jules Styne (music) and Sammy Cahn (lyrics): “Let It Snow! Let It Snow! Let It Snow!”

Berlin believed in America with the enthusiasm of a frightened refugee boy who finds acceptance, makes good, and takes the country’s charter ideals to heart.  “God Bless America”—a hymn reprised whenever a crisis erupts—made its debut on November 11, 1938, sung by Kate Smith on the radio.  On that day, the twentieth anniversary of the armistice ending World War I, Americans could read in their morning newspapers about Kristallnacht in Germany and Austria the night before.  Nazi-inflamed crowds burned down synagogues, smashed store windows, and beat and humiliated Jews as uniformed police looked on.  Though Berlin had written “God Bless America” twenty years earlier—he rescued a draft from his trunk of discarded songs—it represented a vital counterforce to the Nazis’ martial cadenzas.

Not everyone was happy that a Jew had written the nation’s patriotic anthem of choice.   One critic demanded that Berlin turn over all royalties from “God Bless America” to the public.  Berlin rejected such challenges.  Then he, a true believer, turned around and donated the proceeds to the Boys and Girls Clubs of America.

Berlin fashioned morale-boosting songs of simple sincerity and sentiment: "Let’s have another cup of coffee", "Let’s take an old fashioned walk", "It’s a lovely day today".  In Cole Porter’s estimation, “the Berlin ballad” was the top of its field: “What’ll I Do?”; “How Deep Is the Ocean?”; “Always.”  But Berlin could do so much else.  If it’s wit that you want, he will give you a sultry beauty, who can incite a “Heat Wave” by “letting her seat wave.”  Berlin wrote for Fred Astaire and partners in Hollywood and for Ethel Merman and cast on Broadway.  In 1945 Berlin inherited Annie Get Your Gun when Jerome Kern died.  In record time he turned out one of the most memorable scores in theater history: “There’s No Business Like Show Business,” “You Can’t Get a Man with a Gun,” “I Got the Sun in the Morning,” “Doin’ What Comes Natur’lly.”

He didn’t make songwriting look easy.  One observer said that watching Berlin work on a song was like watching a woman in labor.  But he was fast enough when he had to be.  At a Saturday meeting it was decided that Annie Get Your Gun needed one more song.  Rehearsals were set to begin Monday.  Shortly after the meeting ended, Berlin phoned in the words and music of the competition song, “Anything You Can Do I can Do Better.”  He had written it in the cab going home.

"Berlin wanted to write popular songs for a multi-ethnic America. And as time went on in the business of pop song writing, Berlin became a kind of poster boy for the immigrant Jewish sensibility transformed into the mainstream America."

About "A Fine Romance"