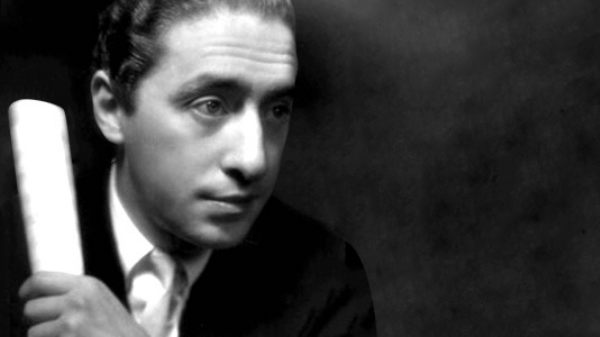 Harold Arlen (1905-1986) broke through when Hollywood songwriter Harry Warren (“Chattanooga Choo-Choo”) heard him improvise on the piano and advised him to turn a certain riff into a song. Warren said he knew just the right wordsmith: Ted Koehler.  Warren was right.  The song was “Get Happy,” the year was 1929, and Arlen and Koehler were a natural team. They succeeded Jimmy McHugh and Dorothy Fields at the Cotton Club, where they turned out two shows a year from 1930 to 1934. Arlen and Koehler wrote “I’ve Got the World on a String” and “Between the Devil and the Deep Blue Sea” and soaked up more than just the ambiance of the legendary club where Duke Ellington and Cab Calloway performed.

Arlen was jazz crazy. Ethel Waters, who sang Arlen’s songs when both worked at the Cotton Club, said that Harold was “the Negro-est” white man she knew. He composed the signature songs of Lena Horne (“Stormy Weather”) and Judy Garland (“Over the Rainbow”).  The Wizard of Oz, which he wrote with the lyricist Yip Harburg, was his greatest popular triumph.  With Harburg he also wrote “It’s Only a Paper Moon” and a ballad Sinatra turned into pure gold: “Last Night When We Were Young.” Arlen’s masterly collaborations with Johnny Mercer, starting with “Blues in the Night” in 1941, made him the natural heir to Gershwin as a composer of jazz songs.

Arlen’s love of jazz was matched by his debt to the Jewish liturgy. For Arlen, a Louis Armstrong “hot lick” on the cornet was the nearest thing to his father’s chanting in Temple Adath Yeshurun in Syracuse, New York. “I don’t know how the hell to explain it,” he said, “but I hear in jazz and in gospel my father singing.” Unlike Al Jolson’s cantor father in The Jazz Singer, Warner Brothers’ celebrated “talking” of 1927, Arlen’s papa liked his son’s secular songs so much he sometime sang the Sabbath prayers to the tune of “Over the Rainbow” or “Come Rain or Come Shine.”

that his glorious improvisations had an effect on me and my own style.”

Excerpt from The New Yorker's "Come Rain or Come Shine" The bittersweet life of Harold Arlen: If Arlen's name is not on the American public's lips, his songs are in our hearts. “Harold's best is the best,” Irving Berlin said. The songwriter and historian Alec Wilder, in his canonical book, “American Popular Song,” warns himself at the beginning of his chapter on Arlen, “I must guard against over-enthusiasm.” He goes on, “If the story was true that George Gershwin was his hero”—it was—“then as far as I'm concerned, the pupil surpassed the teacher. . . . I respect Gershwin, but I envy Arlen.” Gershwin himself respected Arlen, whom he called “the most original of all of us.” Unlike the music of most of his contemporaries, Arlen's harmonic flair and his melodic opulence were not influenced by Europe; instead, they grew out of the liberating principles of American jazz. “He, more than any of his contemporaries, plunged himself into the heartbeat of the popular music of his youth, the dance band,” Wilder writes. “He had that crazy jazz going,” Johnny Mercer, one of Arlen's collaborators, told Walter Cronkite in a nineteen-sixties TV special on the composer. “George's jazz was mechanical compared to Harold's.” Mercer continued, touching his solar plexus, “Harold's was right from in there.”