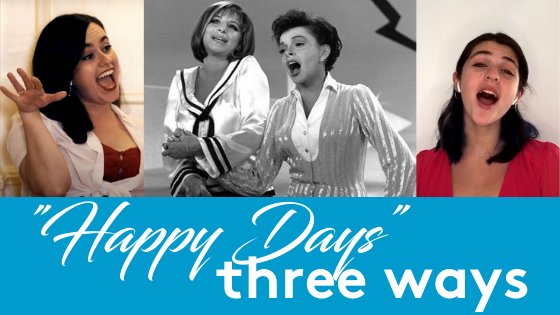 Milton Ager and Jack Yellen's "Happy Days Are Here Again" is a song written in 1929 on the cusp of the Great Depression. It served as President Franklin Delano Roosevelt's campaign song in 1932, and resonated throughout the nation as most Americans were looking to Roosevelt in hopes that his pledge of “a new deal for the American people” would shepherd them safely through the Great Depression into a new era of economic prosperity.

The legacy of "Happy Days Are Here Again" lives on through iterations in 76 recorded albums, its use in over 80 films (including the 1930 film Chasing Rainbows, where it was first heard), and emotionally powerful performances like the ones showcased in this blog.

FDR's use of Happy Days for the campaign trail 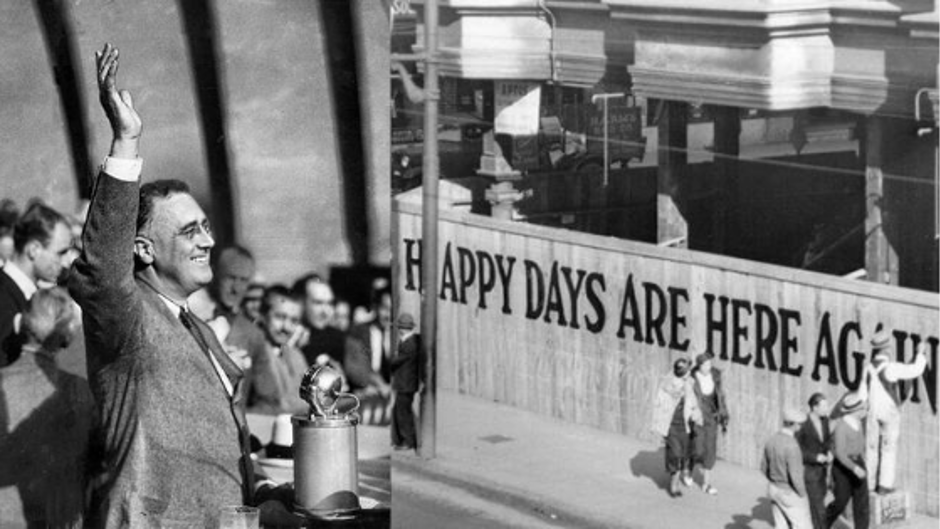 Franklin Roosevelt's selection of the sunny "Happy Days Are Here Again" debuted at the 1932 Democratic Convention — by accident. Judge John E. Mack, the man who introduced Roosevelt, delivered a bland clunker of a speech and walked off stage to the originally chosen song, Anchors Aweigh. Roosevelt's political advisors were so upset by the awful performance that they demanded a new song be played before the candidate's speech. They selected "Happy Days Are Here Again," from the 1930 musical Chasing Rainbows, making Roosevelt the first President to pick a pre-existing song for his campaign and handing the Democratic Party their unofficial theme song for years to come.   — Claire Suddath

Read more about FDR on the campaign trail in 1932

"Each interpreted an upbeat song with a big, trumpeting voice that nonetheless hinted at a small, solitary figure within. Happiness, as hymned in these renditions, would never be won easily . . . it is impossible to watch it without shivering." Read more of the New York Times article "Barbra Streisand Sets the Record Straight".

Mel Tormé, in his book The Other Side of the Rainbow: With Judy Garland on the Dawn Patrol, explained that it was Garland who called him into her dressing room, played Streisand’s record of “Happy Days Are Here Again,” and sang a counter-melody of her signature song, “Get Happy.”

“The result was electrifying, one of those chance discoveries in which two great songs jell into one extraspecial opus,” Tormé wrote.

She was holding my hand and I thought, “Gee, [Judy] seems nervous.” At that time, I wasn’t nervous. I was still very young, I think, about to do Funny Girl, and now, when I think back on it, I think, “Oh, my God, I know exactly what she’s feeling.” Or, you know, the fears. It’s like, as you get older and people are kind of looking for you to fail more, I think—not people, not the audience—but, you know, critics or producers or whatever. And I just felt her. I felt her anxiety. . . . Part of me is much more relaxed than I’ve ever been, less frightened, less anxious. On the other hand, it’s a coming-of-age-thing, and she was much younger than I am, but there are things with careers. . . . I just understand the anxiety even though in a sense I’m calmer. It’s a dichotomy. It’s hard to explain. . . . You wonder, “Well, do I give it up? Do I retire? Or do I get more in before my time is up?”

“Afterward, she used to visit me and give me advice,” Ms. Streisand says. “She came to my apartment in New York, and she said to me, ‘Don’t let them do to you what they did to me.’ I didn’t know what she meant then. I was just getting started.”

An ode to Judy and Barbra

Annie Yokom is not only an alumna of the Songbook Academy; she is also one of nine Songbook Youth Ambassadors that have been named annually since the program’s inception who go on to debut with Michael Feinstein and represent the Great American Songbook Foundation nationally. After attending the Songbook Academy, Annie graduated with a BFA in Musical Theatre from Carnegie Mellon University.She has starred as Judy Garland in the musical “Beyond the Rainbow” at various regional theatre companies amongst other engagements, was cast in the movie Weightless now available on Amazon and iTunes, and released her first single. Annie now lives and auditions in Chicago, and teaches as a part of Artist Empowered (a college and career coaching program for students that she helped to create).

Why did you choose to sing "Happy Days Are Here Again"?

We chose this song because it gives you the goosebumps every time you hear it. Cassie and I had never sung together before and had been wanting to for years and this arrangement was perfect to celebrate my love for Judy and Cassie’s love for Babs.

What does this song mean to you?

Gratitude for the hard times and that now you can see how happy the days really can be, after experiencing being in that hard place. Almost like after a big cry and you can relax and feel the warmth from the sunshine. You are at ease to be free from that hardship and be hopeful for what is to come.

What do you hope to convey to anyone listening to your performance?

We are all going through a seriously hard 2020. Days full of confusion, sadness, hard conversations and worry. But I know that you have to have rain to appreciate the sunshine and we will come out the other side more aware, knowledgeable and grateful. I hope people feel connected to us and to each other and free to feel all the feels.

A message from Lila:

The thing I love most about music and singing is the emotion one can convey through music and song. There is music for every single mood and feeling. I feel that I can show my emotions more through song than I can with just words. I also feel that music gives me the ability to truly be myself, and gives me an outlet to be creative. So far, I have found that the arts make me most happy, and give me a space to be creative.

Why did you choose this song?

I picked this song because I think everyone could use a little extra happiness in these crazy times. Even just the title “happy days are here again” seems very relevant at the moment, because we all want life to go back to normal! I feel hope when I sing/listen to this song, and it makes me happy!

What does this song mean to you?

This song has been one of my “anthems” for as long as I can remember, and has reminded me to keep my head up and look forward to the future and to my goals time and time again.

What do you hope to convey to anyone listening to your performance?

I hope to bring one simple thing to those watching my performance, joy! Everyone deserves to be happy!