Diary of a Songbook Intern 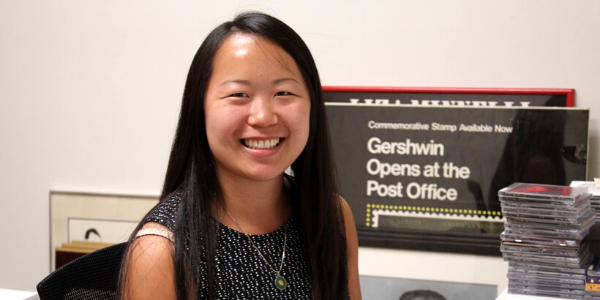 Hello, my name is Jan and I am in my second and final year of my Master of Arts in Museum Studies. My program requires that I do an internship and partners with local museums to match students with paid internships. I am interested in collections work, so that’s how I ended up at the Great American Songbook Foundation in the archives with archivist Lisa Lobdell as my mentor.

My first project started on my first day, and it took me months to complete. The archives had recently moved from its former location in the Palladium to the warehouse where Lisa and I work. The audiovisual room has shelves around the outside for CDs and two back-to-back rows of shelves in the middle for DVDs. We started with rearranging the CDs by spreading them out across all the shelves to better utilize the space and so that as the collection grows, we don’t have to constantly shuffle all of them to make room. In doing this, we found that some of them were labeled incorrectly. And then there were enough to fill an entire box. And then another box. And we ended up with about eight boxes, filled to the brim. So, my first project was going into LibraryWorld, which is where we catalog published works in our collection, changing the label in the system and then changing the physical label on the CD, which consists of a label sticker and a label protector sticker. Side note: stickers that don’t come off cleanly are the bane of my existence. 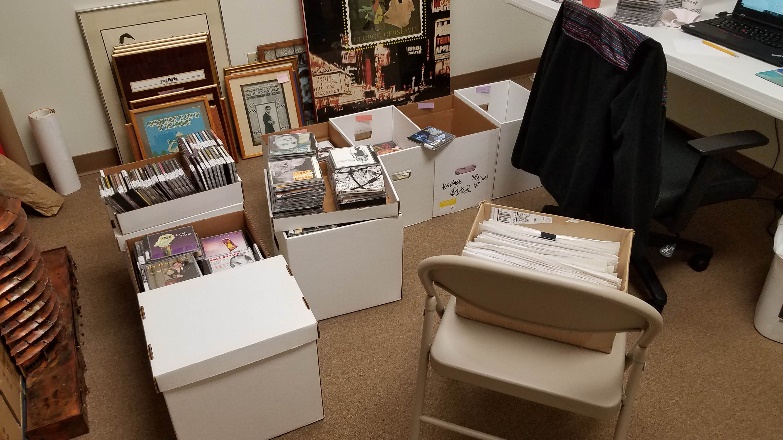 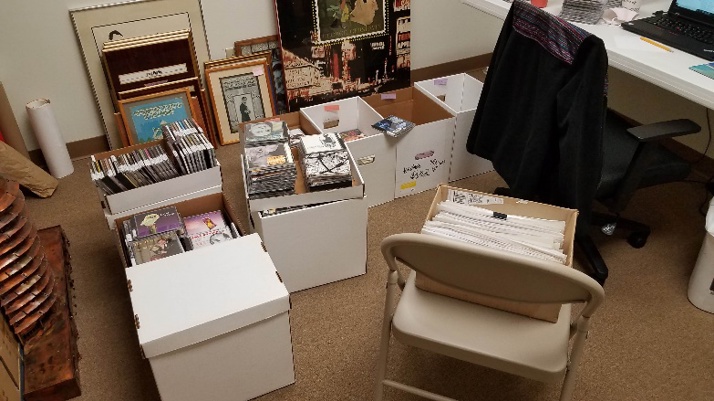 A portion of the CDs whose labels I corrected during the fall semester.

Ross [Edelstein], the intern before me and fellow student in my program’s cohort, had been working on the digitization of the Meredith Willson collection. Willson wrote The Music Man and The Unsinkable Molly Brown, but also worked in radio and TV. A grant from The Music Man Foundation allowed us to send some of the Willson recordings to George Blood, in Pennsylvania, to be digitized and they sent the files back on hard drives. In order to have the items published on IU’s Media Collections Online, we had to transfer them to a Dropbox along with a spreadsheet of the metadata using WinSCP. As of today, there are three videos left to be transferred, and I started with hundreds. 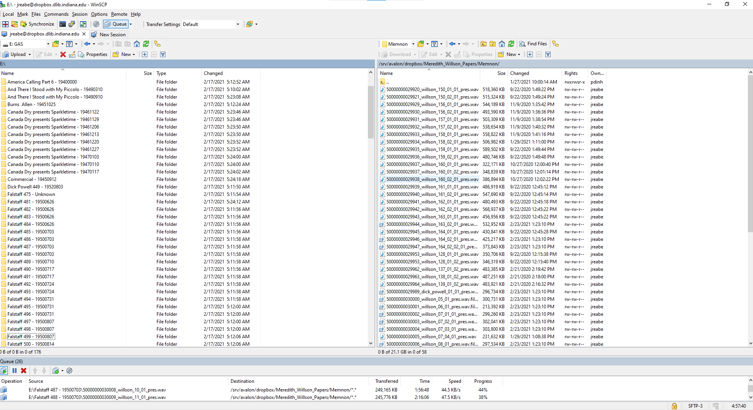 This is WinSCP, where I transfer the Meredith Willson files from the hard drive to IU's Dropbox.

In addition to the Meredith Willson files digitized by George Blood, we had another set of his audio files digitized by Memnon and paid for through a grant from the National Endowment for the Arts. We’ve received one of the two hard drives and I’ve already gone through the same process with these files as before, with the exception of the metadata spreadsheet. For the Memnon files, I had to create the spreadsheet with the information that we sent to Memnon along with the files and by looking at the labels on the records and listening to them. 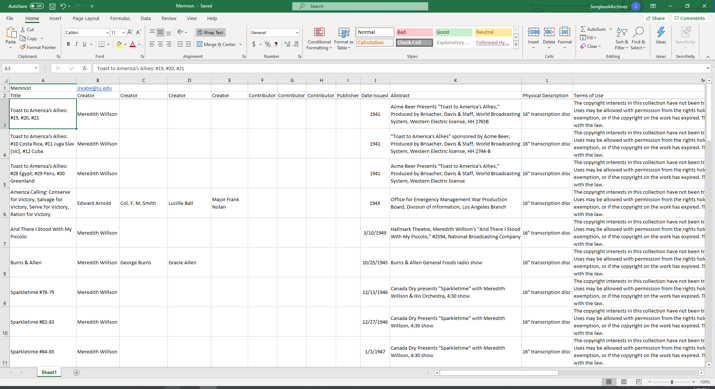 This is what the spreadsheet looks like that I use to move the Meredith Willson files from IU's Dropbox to Media Collections Online, where it then has to be published.

The Songbook Foundation received a grant to hire a music librarian for two years. Lisa is preparing for the second round of interviews, so we’ll have a third person in the warehouse soon. There is a total of four units in the building that contains the warehouse. Lisa had told me last semester that it’d be nice to have the whole building if the people leasing the other units moved out. Earlier this year they did, so Chris Lewis, the executive director, and Lisa are working with the budget to add the rent of the new units. They aren’t sure how many of the units they want, but we’ll have access to it in April or May.

I’ve been steadily working through rehousing the Ray Charles Papers collection. Lisa will clarify that it’s “the other Ray Charles.” He kept all of the papers from his productions in binders, and some were custom-made for the production. Last semester I was taking the contents of the binders and putting them in folders in boxes, then updating the inventory. His production binders filled around forty document boxes. This semester I’m doing the same thing with his binders for the Kennedy Center Honors. These binders started in 1987 and I’m in 2007, and still counting. 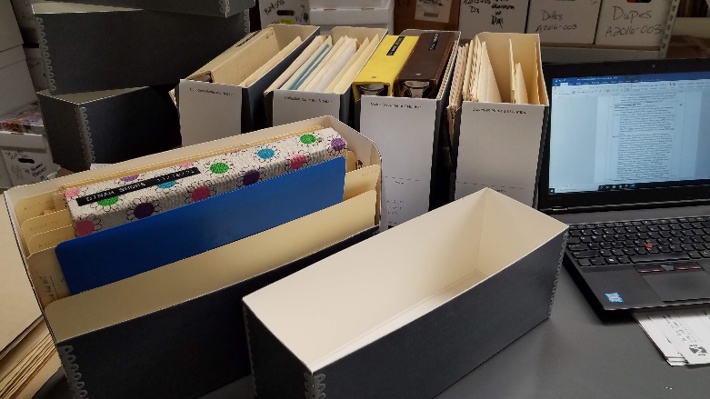 These are the boxes I rehoused the contents of the binders in. 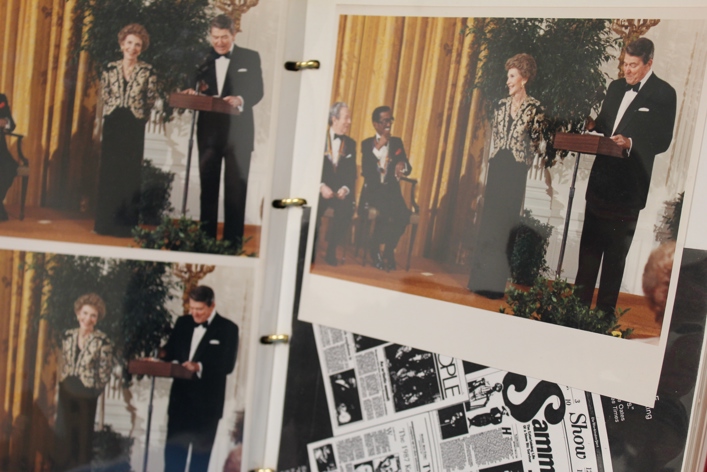 Here's a look inside one of the scrapbooks in the Songbook archives donated by the grandnephew of Jimmy Van Heusen. This is from Sammy Davis Jr.'s 1987 induction into the Kennedy Center Honors.

If it’s slow, usually because we’re waiting on more boxes to come in, or a hard drive to be shipped, then I’ll add locations in AtoM, where we catalog our collections. The locations of the collections in AtoM haven’t all been updated since moving to the warehouse, so I’ll go down each aisle and look up the collection by accession number.

The Songbook Foundation has two of Ella Fitzgerald’s outfits, a gown and a pantsuit. Lisa ordered two textile boxes to store them in and they came in October. Since these are the only textiles in the archive, we both watched a video on the handling procedure. Donning cotton gloves, we laid the outfits in the boxes between layers of tissue paper. This month, Lisa wanted to order a custom mannequin, so last week we took the pantsuit out of its box and, using a cord and retractable tape measure for a lack of a cloth one, took its measurements. 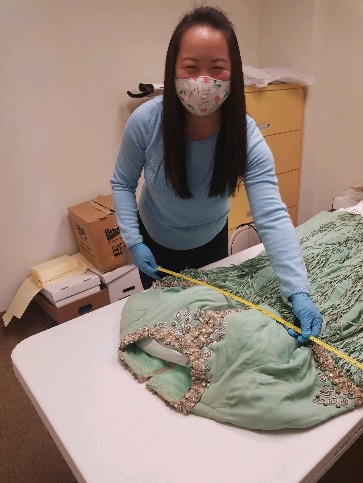 Me measuring Ella Fitzgerald's pantsuit for a custom mannequin.

Last semester, Chris, Lisa, and I went to a donor’s house to pick up a collection of arrangements written for Kay Starr. We filled up a minivan and a car with a couple dozen boxes. Later today, Lisa and I will be visiting the home of Jane Lommel, the widow of Richard Judy. He gave us a small collection of X-ray recordings, and now she wants to donate more. During the 1950s and ‘60s, foreign music was not allowed in the Soviet Union, so recordings would be cut from X-ray films. They were very low quality, but definitely an interesting part of music history.

It’s the end of the month, so today is Cleaning Day at the warehouse. Usually, Lisa cleans the bathroom and I check the bug traps and record what I find in a spreadsheet. The traps have a sticky section on the bottom so that when insects walk across it, they get stuck. We have at least one in each office, a couple spread out around the archive, and by the doors. The most common insects to find in the traps are ants and spiders, sometimes a centipede. The big ones gross me out every time, and some of them are quite large.

Six insect glue traps to replaces ones around the warehouse.

Integrated pest management (IPM) is actually an important part of caring for collections. It’s preventive conservation. Protecting your collections from and keeping track of pests before they become a problem is much preferred to dealing with the consequences of insects eating through your paper objects or the like.

Ray Charles’s son sent us some of his father’s records and they arrived today. As we were unpacking them and putting them in new sleeves, I learned some things that I will share with you.

Here is a YouTube video that Lisa sent to me about how records are made:

Today, Lisa told me that we will be leasing all of the other units in the building. So, later today we’ll go over and I’ll get to walk through the new space. This afternoon is my midterm site visit with Dr. Liz Kryder-Reid for the class that goes with this internship. It’s over Zoom, and we’ll discuss what I’ve been up to since January. Lisa has also informed me that the bugs are back. Yesterday she found a slug in the corner of her office and this morning she smashed another bug by her desk. Just now she shouted “Eww, come here!” to which I said I didn’t think I wanted to. It turns out there was a centipede a couple inches in length and with such long legs on the wall at eye level by the door. We got out the vacuum, but even with the hose and an extension attachment to be as far away as possible from the insect, I froze after Lisa exclaimed “Get it, quick!” To say I do not like bugs is an understatement, and to be warned that there is the possibility of it moving quickly and unexpectedly is terrifying. I am not looking forward to checking the sticky traps at the end of the month. Although the bugs are dead, I have to get much closer to them than is preferred when I grab the traps. Anyway, now the vacuum is plugged in by the door, ready to dispose of any insect that comes into the warehouse. After this debacle, I asked Lisa if there was anything else we could do regarding pest management. The answer was no. Although the outside of the building has been sprayed, collections managers have to be careful about the use of chemicals around their objects.

Lisa and I went over to the other units this morning. There are a total of five offices, a break room, a garage, a processing room, a lobby, a lobby disguised as an office, and this room that is kind of a bulge in the hallway.

Big news! All of the Meredith Willson files digitized by The Music Man Foundation have transferred to IU’s Dropbox! Now I can ingest them and publish the remaining seven files on MCO. In other news, yesterday, Lisa, Chris the executive director, Jeff McDermott the President/CEO of the Center, Chris the volunteer, and I went over to look at the other building units. During my midterm meeting with Liz, I talked about how we were expanding, and she asked if I was going to assist with the space planning, because it’d be great for my resume. So, after the group of us walked through the space, I was still thinking about it and asked Lisa if they had given us floor plans. She said they hadn’t, but I could go measure the space, if I wanted. I did and am now creating a floor plan in SketchUp, a 3D modeling software that I was introduced to in my Exhibit Planning and Design class last spring. Lisa and I just went over to the other unit to measure the bigger rooms and in the last room, I leaned against the wall, which had wet paint, and got it all over my jacket sleeve. Thankfully, it came out easily with some soap and scrubbing. It is now drying in the second bathroom on a doorstop that is very high up. 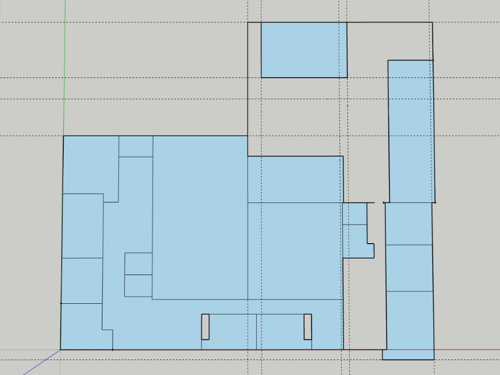 This is what I have in SketchUp so far. I'm still working on the archives space, and did not account for the thickness of the walls when I measured, but you can see the relative sizes of rooms and their relation to each other.

This will be my last post before I send it off to Renée and Chelsea. Thanks for reading about my experiences in the Songbook archives this year. It’s just a peek into the world of libraries, archives, and museums, but I hope you learned something new and were entertained while doing so. Bye!