Book Review: "The Gershwins and Me: A Personal History in Twelve Songs" 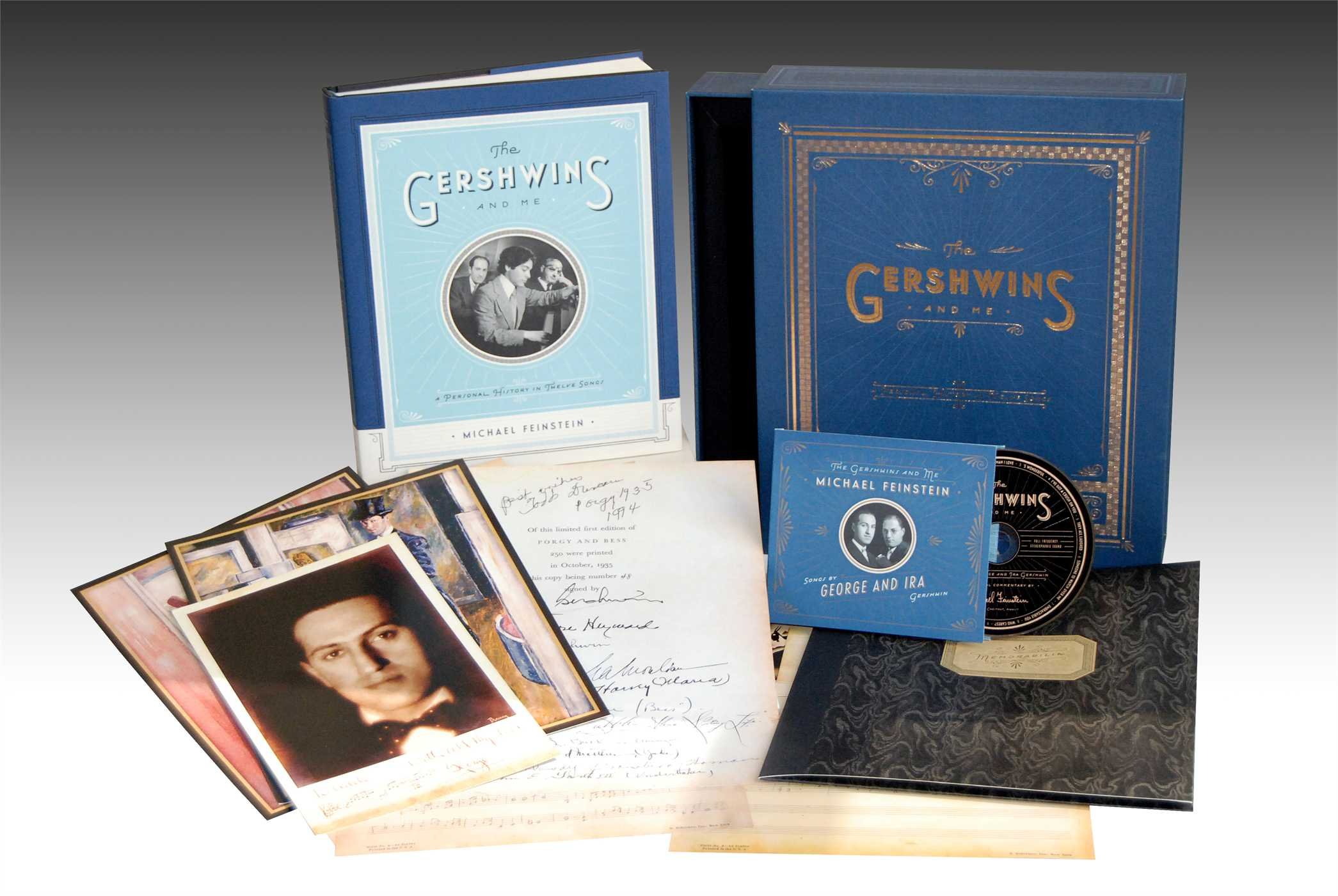 "The Gershwins and Me: A Personal History in Twelve Songs" by Michael Feinstein

‘S wonderful, ‘s marvelous that Michael Feinstein, dubbed “The Ambassador of the Great American Songbook,” has created this beautiful homage to the brothers Gershwin, George and Ira.

As Feinstein noted in a recent interview, there are already many books about Gershwin and his compositions, most of them linear.  What makes this opus fresh? First of all, the author’s love of the Twenties and Thirties. Music was a dominant force in American society from the end of World War I through the next two decades.  While acknowledging that he would have enjoyed experiencing the musical creativity and art of the time, Feinstein believes that he lives now not by accident but so he can work to ensure that the music of the early years of the Great American Songbook lives on.  Secondly, Feinstein is devoted to his subjects – the brothers Gershwin.  He cares deeply about them and their relationship with each other. This book relies heavily on conversations that Feinstein had with Ira Gershwin and his circle of friends and colleagues during the six years he catalogued Gershwin’s recordings and archives. These reveal the deep and abiding devotion Ira had for his younger brother. Finally, Feinstein’s zeal for music shines through the text in comments like, “When all else falls apart, music is the refuge that rescues and revives the soul.” 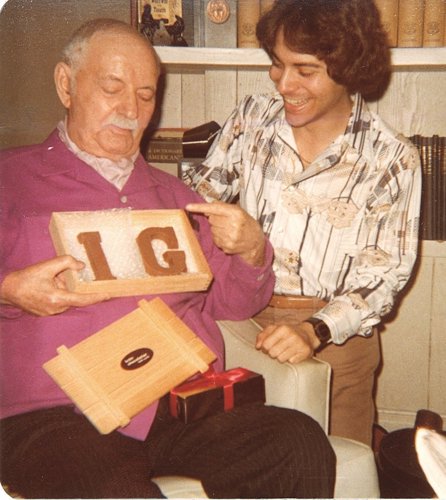 From the book: Michael Feinstein (right) worked for six years as Ira Gershwin's cataloger and archivist.

As the title reveals, the book is organized around 12 of the Gershwin brothers’ songs. The format for the book evolved from Feinstein’s imagination as he tried to determine what the book would be. He needed a format that would best serve the anecdotes and stories he wanted to include. It was a challenge to choose only 12 from the myriad of songs the brothers composed because Feinstein loves so many of them.  He chose songs that provided an “aural cross section” and were the best springboards for the story he planned to tell. As each chapter unfolds, it is clear that the choice of song does, indeed, reflect a particular aspect of the history of the brothers’ collaboration.

“The Gershwins and Me” is written for a broad audience. Feinstein wanted to create a book that would be of interest to those who know nothing about the Gershwins and the America in which they lived and worked. It was also important to create a book that was inviting and would be of interest to Gershwin fans – who will find a treasure trove of memorabilia, including photos and reproductions of artifacts from the Gershwin and Feinstein collections among the pages of “fly on the wall” anecdotes and stories.

This personal history provides a wonderful distillation of the era that produced so much music. According to Feinstein, “all the elements that made Gershwin who he was came from the collective experience that made America what it was at the time.” New York was a melting pot and the “swagger and energy of Gershwin’s melodies and harmonies was directly conspired by his environment. You can feel the New York of the Twenties in Rhapsody in Blue and Porgy and Bess is filled with the art deco feeling of the Thirties.”

The reader will also learn about the work styles and personalities of the brothers Gershwin. Ira preferred to hear the melody before creating lyrics. He also made suggestions to George which resulted in a better melody. The strength of the partnership which paired two very different individuals – the driven George and the relaxed Ira – is paralleled by George’s preference for the New York lifestyle and Ira’s penchant for laid back Los Angeles. Feinstein writes that George always wanted to learn more about the craft of composition – he asked classical greats like Ravel, Stravinsky, Nadia Boulanger and Schoenberg to teach him.  None would take him on as a student because he was already so good at composing. George, however, was not satisfied just to be a good song writer. He also wanted to create more serious compositions and challenge himself and the standards of his time. He knew, however, that he had to be ready before he could begin a composition.  For example, it took George nine years from the time he first read the story of Porgy and Bess until he began setting pen to paper.

A bonus of The Gershwins and Me is the compact disc with the twelve songs referenced in the title performed by Feinstein with Cyrus Chestnut at the piano. Each track reveals the depth of emotion that inspired the book. The loving interpretations are punctuated by Chestnut’s accompaniments combining Gershwin harmonies with Chestnut’s facile jazz technique. The pairing parallels aspects of the partnership between George and Ira. The result is a disc which is easy to listen to and will reveal new riches upon subsequent hearings. The final track includes Feinstein’s commentary on each song and his interpretation of it.

It is hard to imagine anyone but Feinstein, with his solid credentials as an interpreter of Gershwin and his years of friendship with Ira Gershwin, writing this book. The stories and anecdotes will transport the reader back in time and, hopefully, will lead to deeper enjoyment and understanding of the Gershwin brothers’ music. The Gershwins and Me is a valuable resource, its author a master storyteller and singer. As Ira Gershwin wrote, “Who Cares?” Well, this writer hopes many, many people already do!

OWN YOUR COPY OF "THE GERSHWINS AND ME" 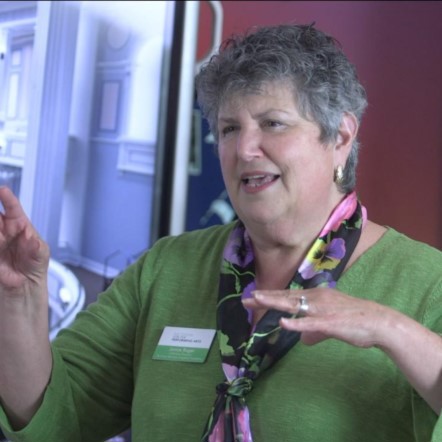 Cantor Janice L. Roger came to the Indianapolis Hebrew Congregation (IHC) in 1979, after completing her cantorial studies at the School of Sacred Music of Hebrew Union College.

A native of Chicago, Cantor Roger grew up at Temple Beth Israel where she began singing in the choir at age 8. Janice studied at Chicago Musical College, where she received a Bachelor of Music degree in Music History. She also did course work in Hebrew and Jewish Studies at the Spertus College of Judaica prior to attending HUC.

In 2012, Janice learned about a Great American Songbook exhibit about Jewish composers who wrote for Tin Pan Alley. She was interested in bringing the exhibit to Indianapolis and learned that we could get a copy of it, and contacted Lisa Lobdell. Since that initial contact with Lisa, Janice has become a staple at the Great American Songbook Foundation. She volunteers as a Collections Processor, and is currently working on listing the items in the Ray Charles Collection. She also uses her performing and leadership talents in the Perfect Harmony program.