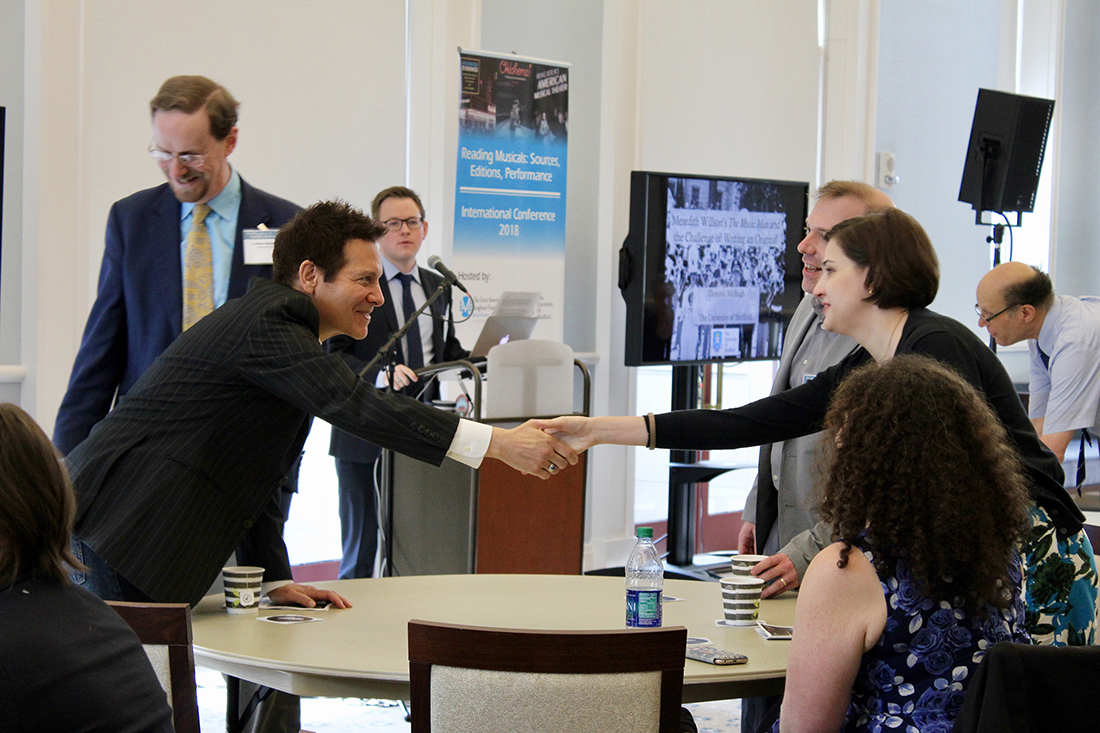 Great American Songbook Foundation Founder Michael Feinstein greets attendees at the 2018 StageStruck! Conference. For this year’s virtual conference, Feinstein will give opening remarks and will highlight materials from the Songbook Library & Archives in recorded video segments throughout the conference.


Scholars, performers from around the world will gather in May for StageStruck!

Industry panels with celebrity guests open to the public

Under the theme Reframing the Golden Age Musical: Methods, Sources, Performance, the conference will take a fresh look at Broadway shows of the 1940s to 1960s, a period that still looms over the genre with such classics as Oklahoma!, Guys and Dolls, My Fair Lady, West Side Story and Kiss Me, Kate.

The era closed the careers of such towering figures as Cole Porter, Irving Berlin and Kurt Weill; saw the peak output of Rodgers and Hammerstein and Lerner and Loewe; and gave rise to the creative influence of Stephen Sondheim and Bock and Harnick. From today’s perspective, however, many of these treasured works are problematic in terms of race, gender representation and other issues.

“It is such a privilege to bring together over 40 of the major figures in Broadway scholarship to discuss the classic musicals that so many of us love, and the participation of industry figures makes it extra glamorous,” said the curator of the conference, musicologist Dominic McHugh of the University of Sheffield (U.K.). “But our purpose is to understand this repertoire more critically, whether from the point of view of addressing its outdated views in revivals in the 21st century or discovering long-lost works in resources like the Songbook Foundation’s Library & Archives.”

Enabling this type of critical discussion is a key part of the Songbook Foundation’s mission, Executive Director Christopher Lewis said.

“Aside from simply preserving the history of this rich body of work, it is important both to celebrate and critique these songs and shows that still influence American culture,” Lewis said.

Combining 10 academic panels with special discussions between leading actors, the digital conference also will include the launch of six new books on musicals and a special conversation between senior musical theater archivists at the New York Public Library and the Library of Congress. Live participation will take place for approximately two hours each day starting at 12 p.m. ET. The May 15 keynote speaker is Kara Gardner, author of Agnes de Mille: Telling Stories in Broadway Dance.

Two industry panel discussions open free to the public on May 12 and May 14 will feature guest artists including Melissa Errico (My Fair Lady, One Touch of Venus), Shereen Ahmed (My Fair Lady, NBC’s New Amsterdam), Ali Ewolt, (Phantom of the Opera, Les Miserables) and Judy Kuhn (Fun Home, Chess). These events will invite actors to share their perspective on social issues surrounding Broadway’s Golden Age, both through a historical lens and as repertoire still being performed today.

Registration for the academic community remains open at http://bit.ly/stagestruck21. Public registration will open later this month at TheSongbook.org/StageStruck. Additional daily sessions will be streamed via the Great American Songbook Foundation’s YouTube channel.

The conference marks the 70th anniversary of Weill’s death and honors the career of Kim Kowalke, professor of music at the University of Rochester (N.Y.) and president of the Kurt Weill Foundation. Previous Stagestruck! conferences have been held on site at the University of Sheffield and at the Great American Songbook Foundation’s headquarters in Carmel.

ATTACHED IMAGE: Great American Songbook Foundation Founder Michael Feinstein greets attendees at the 2018 StageStruck! Conference. For this year’s virtual conference, Feinstein will give opening remarks and will highlight materials from the Songbook Library & Archives in recorded video segments throughout the conference.