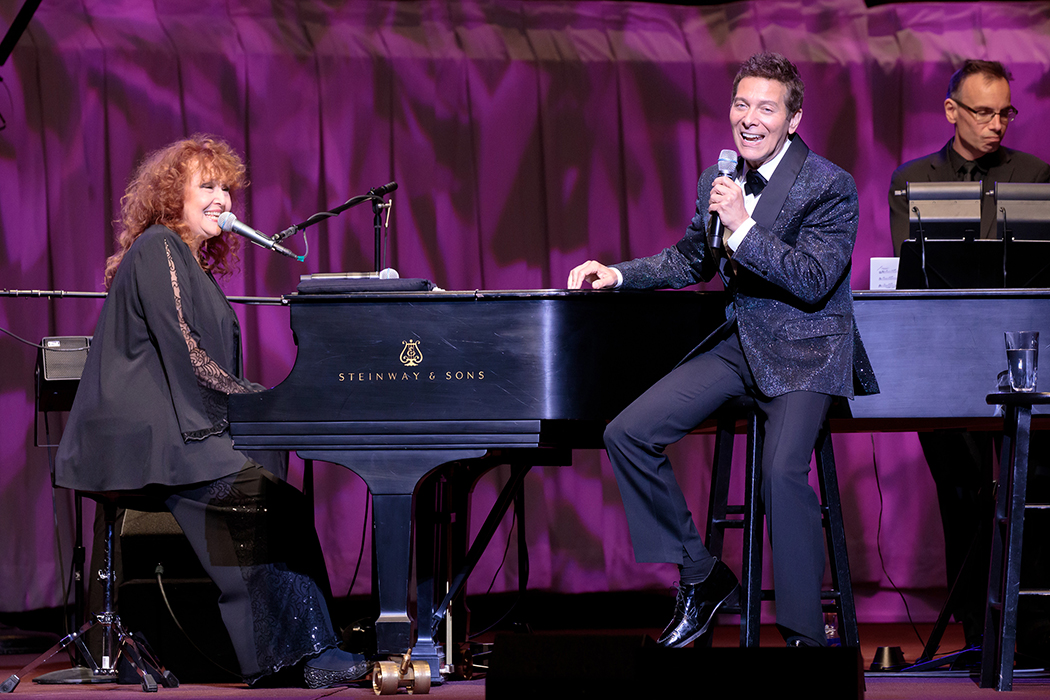 Melissa Manchester and Michael Feinstein close their Saturday evening performance at the Palladium with a duet on “Whenever I Call You ‘Friend,’” which Manchester co-wrote with Kenny Loggins. At right is music director Tedd Firth. (Photos by Bill Crawford, Harbor Pictures Co.)

CARMEL, Ind. – During a joint performance Saturday at the Center for the Performing Arts, Great American Songbook Foundation Founder Michael Feinstein surprised his longtime friend Melissa Manchester with an induction into the Songbook Hall of Fame.

Manchester is perhaps best known for her Billboard Top 10 singles “Midnight Blue,” the Grammy-nominated “Don’t Cry Out Loud” and “You Should Hear How She Talks About You,” which won a Grammy Award for Best Female Pop Vocal Performance. Her original songs have been recorded by artists including Barbra Streisand, Roberta Flack, Dusty Springfield, Alison Krauss and Kenny Loggins, with whom she co-wrote his hit “Whenever I Call You ‘Friend.’”

Saturday’s Center Presents performance at the Palladium concert hall was the first public appearance in over a year for both Feinstein and Manchester. As she closed her initial hit-filled set, Feinstein and Songbook Foundation Executive Director Christopher Lewis walked on stage to surprise her with the Songbook Hall of Fame’s New Standard Award.

“Among the awards we present each year is the New Standard Award, which is presented to a songwriter or performer who continues to write and perform music that will stand the test of time and become the pop standards of tomorrow,” Feinstein said during the impromptu presentation. “I can’t think of anyone who fits that description more than Melissa Manchester. Her music has touched the lives of so many people over the years. Her songs – many of which we heard tonight – have become standards and are part of the fabric of our lives.”

The Great American Songbook Hall of Fame celebrates lyricists, composers, performers and other artists who helped to create “the soundtrack of our lives” with their contributions to American popular song. Hall of Fame inductees are chosen based on factors including musical influence on other artists, length and depth of career and body of work, innovation and superiority in style and technique, and overall musical excellence.

Manchester and two other artists, not yet announced, will be formally inducted during Songbook Hall of Fame events in September. More information is available at TheSongbook.org/Hall-of-Fame.