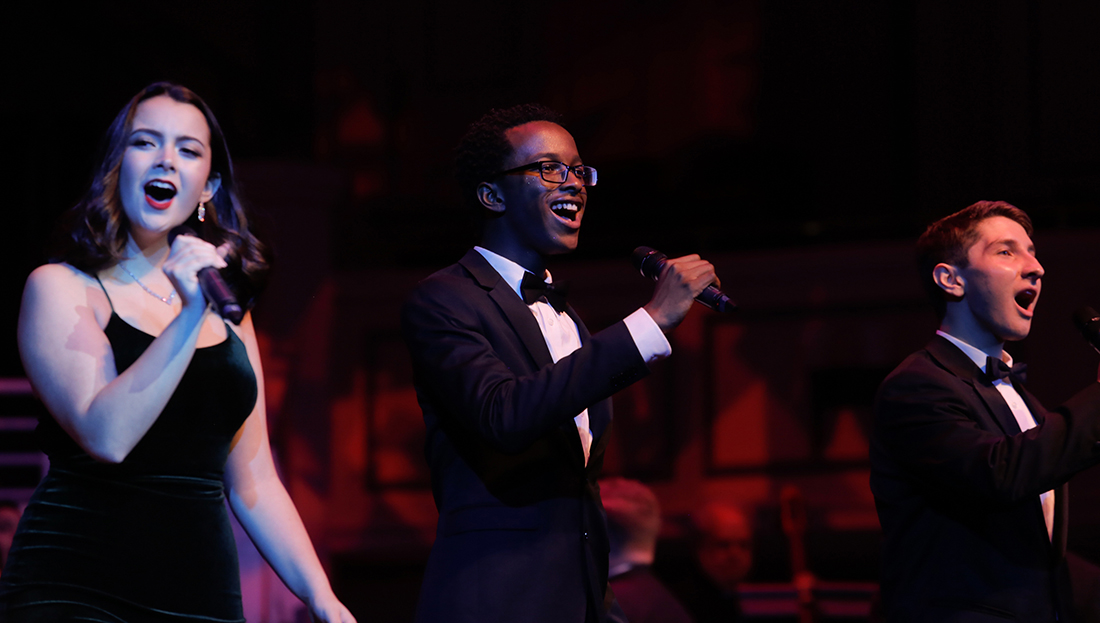 Finalists Lily Shires of Florence, Kentucky, Robert Barksdale of Buffalo, New York, and Noah Sorscher of Camp Dennison, Ohio, perform at the 2019 Songbook Academy Finals at the Center for the Performing Arts.

entertainment professionals for week of mentoring, lifetime of networking

CARMEL, Ind. – U.S. high school singers with interests in musical theater, jazz and classic popular music can apply now to experience a life-changing week of performances, pre-professional training and personal mentoring from Broadway stars and other arts and entertainment professionals.

The Great American Songbook Foundation has opened the application process for its 12th annual Songbook Academy® national music intensive, taking place July 17-24, 2021, at the Foundation’s home, the Center for the Performing Arts in Carmel, Indiana. Candidates may apply at getacceptd.com/songbookacademy.

Only 40 students nationwide are selected each year to experience a lively and rigorous schedule of workshops and masterclasses on topics such as vocal technique, vocal health, song interpretation, phrasing, stage presence, music history, business concerns and auditioning for college arts programs. Participants build relationships with peers and pros, perform before live audiences and join the Songbook Academy Alumni Network to stay connected and informed about college programs, auditions and performance opportunities.

Songbook Academy alumni include Maddie Baillio (2014), who appeared in NBC’s Hairspray Live! and Netflix’s Dumplin’ and joins an all-star cast in the upcoming film adaptation of Cinderella; Anaïs Reno (2018), who has performed at Birdland and Feinstein’s/54 Below in Manhattan and recently was profiled in the New York Times among “the next generation of cabaret showstoppers”; and Melinda Rodriguez (2013) and Julia Cooper (2016), who have competed in recent seasons of NBC’s The Voice.

Because of public health concerns, Songbook Academy moved to a virtual format in 2020. With similar contingency plans at the ready, the Foundation intends to offer the 2021 program on-site at the Center for the Performing Arts’ three-venue campus, Executive Director Christopher Lewis said.

“Although we missed gathering in person last summer, the feedback from the finalists and their families was as positive as ever, and the performances reached wider audiences than ever before,” Lewis said. “We’ll be monitoring the developments, but we are confident that we can provide an unforgettable experience regardless of the circumstances.”

The application deadline is March 15, 2021, with an early-bird discount available through Feb. 15. Need-based scholarships, fee waivers and other financial-aid opportunities are available.