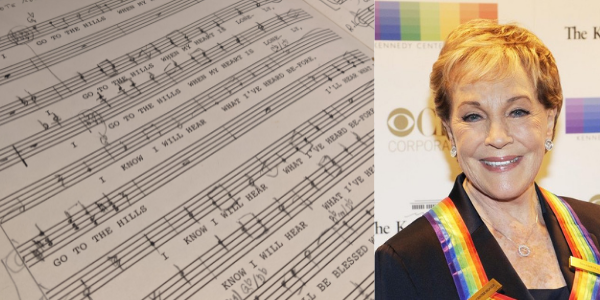 Since 1978, a select number of performing artists who have given lifetime contributions to American culture have been honored at the annual Kennedy Center Honors. In 2001, another legendary lady – iconic film and musical theater actress Julie Andrews – was chosen for her memorable performances in films like The Sound of Music and Mary Poppins, being a “beacon of happiness and light to generations of filmgoers” and her philanthropic work with Save the Children and UNICEF.

"Hopefully, I brought people a certain joy. That will be a wonderful legacy." —  Julie Andrews (This Week, 18 September 1966)

Dame Julie Andrews brought Mary Poppins to life, gave Maria von Trapp a voice, and was fit for a queen in The Princess Diaries. Before she played any of these iconic women, she was born Julia Elizabeth Wells in Surrey, England. Her talent emerged early: At 11 she started singing on the road with her parents, and by 13 she was performing in front of Queen Elizabeth. Six years later, she was on Broadway, and at 20 she starred as Eliza Doolittle in My Fair Lady. Andrews went on to Hollywood and stole the hearts of Americans in the 1964 Disney musical film Mary Poppins, for which she won an Oscar. The following year, she played an Austrian governess in the film adaptation of Rodgers and Hammerstein’s The Sound of Music, which solidified her place in American music history. She has authored two memoirs and even sang in The Princess Diaries sequel. She has won countless awards, including an Academy Award for The Sound of Music, six Golden Globe Awards, three Grammy Awards, and a Lifetime Tribute Award from the British Academy of Film and Television Arts. Her life came full circle when she was knighted by Queen Elizabeth II for her contributions to the performing arts.

The "other" Ray Charles was best known for working with Perry Como and the Ray Charles Singers. During his career as an arranger, music consultant and musician, he worked with Bob Hope, Bing Crosby, John Denver, Glen Campbell, Julie Andrews, and everyone’s favorite, the Muppets, on their television specials. Among his accolades was serving as musical consultant to the Kennedy Center Honors for 32 years, retiring at the youthful age of 95. 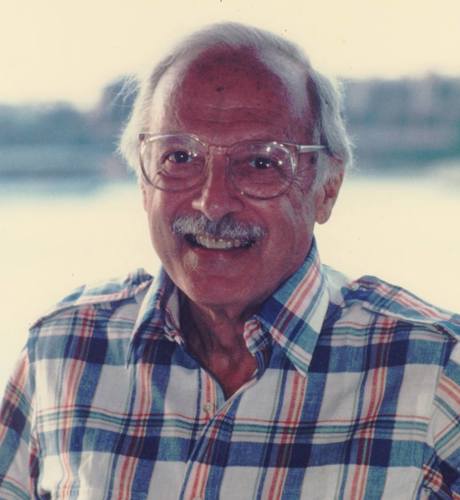 Charles kept almost every Kennedy Center Honors production binder from 1982 to 2014, leaving an ink and paper memory of the work that is done behind the curtain. As you read on, you will find the script used by Carol Burnett for her homage to Julie Andrews, and a musical arrangement of "The Sound of Music" created for soprano Rebecca Luker's contribution to her musical tribute.

Singer-actress Julie Andrews and comedian-actress Carol Burnett have both made invaluable contributions to American popular culture. Burnett rose to fame with her comedy series The Carol Burnett Show, as well as Broadway shows and movies, and Julie Andrews rose to fame starring in Broadway shows such as My Fair Lady, as well as classic movie roles in Mary Poppins, The Sound of Music, The Princess Diaries, and more.

Burnett and Andrews have built a friendship that has lasted six decades. It started in 1960 when mutual friends brought Andrews to see Burnett star in Mary Rodgers and Marshall Barer's Once Upon a Mattress. After the show, they went to a Chinese restaurant and found themselves talking into the night. The pair have a flair for making audiences laugh, as is evident in their 1962 CBS special Julie and Carol at Carnegie Hall.

Julie and Carol at Carnegie Hall at 50: History Of Musical Comedy

Carol Burnett and Julie Andrews have built a friendship that has lasted six decades. It started in 1960 when mutual friends brought Julie to see Carol Burnett star in Mary Rodgers and Marshall Barer's Once Upon a Mattress. After the show, they went to a Chinese restaurant and found themselves talking into the night.

Follow along with the opening of Carol's tribute speech to Julie Andrews in this rare script from the Ray Charles Collection: 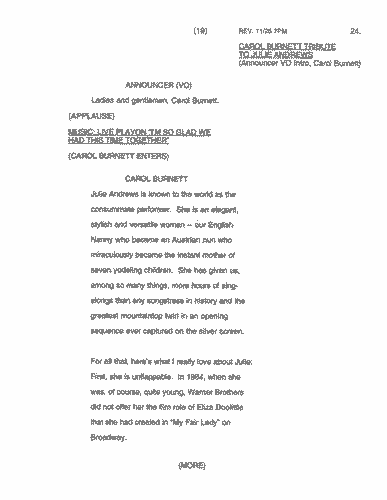 As Carol Burnett said, "[Andrews] has given us, among so many things, more hours of sing-alongs than any songstress in history..." You may feel a song coming on with the following musical tribute to Julie Andrews.

A Musical Tribute to The Sound of Music

Like her predecessors, Julie Andrews was treated to a mini-concert of her most memorable songs and musicals for her Kennedy Center Honors celebration. Her musical tour featured stars like Robert Goulet, Kristin Chenoweth, Audra McDonald and Rebecca Luker performing selections from My Fair Lady, Mary Poppins, Camelot, and The Sound of Music. 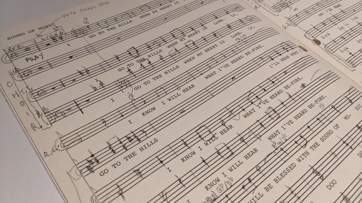 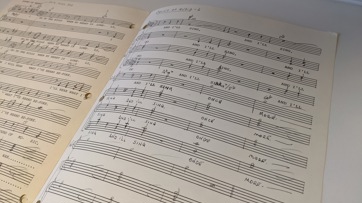 As an inevitable closer, Rebecca Luker delivered a soaring rendition of "The Sound of Music," with the other soloists and a massive chorus joining in for the final verse. In light of the news of Andrews' vocal problems at the time, Oscar Hammerstein II's "and I'll sing once more" had heart-tugging significance.