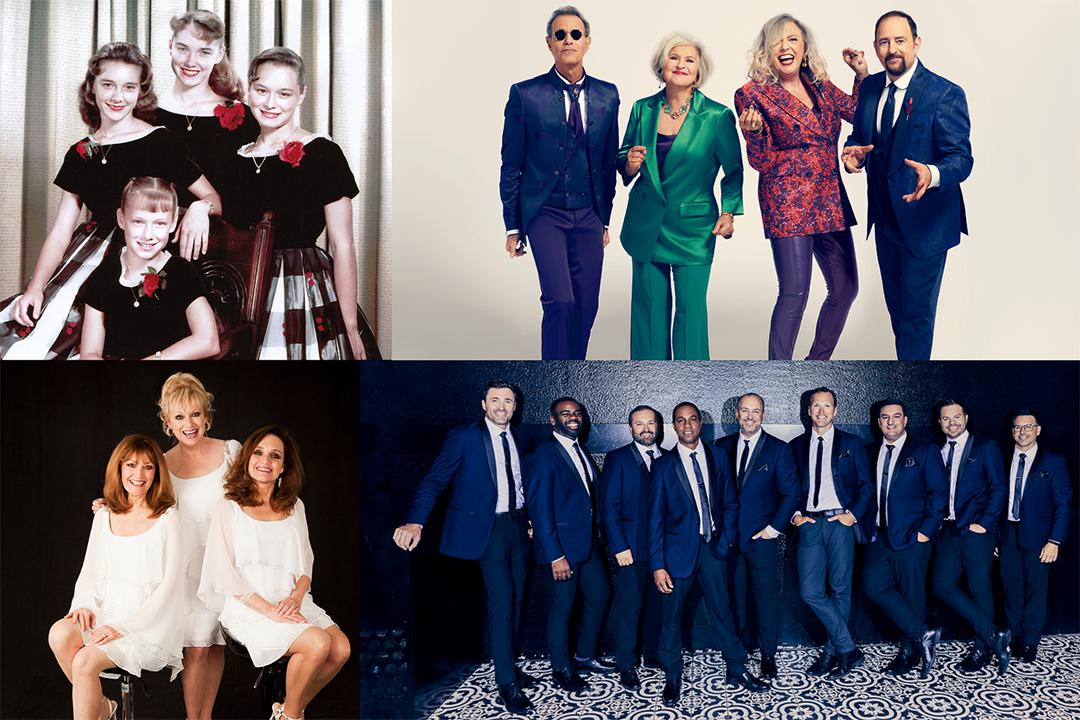 The latest inductees to the Songbook Hall of Fame are, clockwise from lower left, The Lennon Sisters (pictured recently and in the 1950s), The Manhattan Transfer; and Straight No Chaser.


The Lennon Sisters, The Manhattan Transfer, Straight No Chaser
honored for contributions to popular music

The Lennon Sisters, The Manhattan Transfer and Straight No Chaser took part in a video induction ceremony and will be honored throughout the coming year with programming that explores the traditions of vocal harmony and the impact of these artists on the American Songbook.

“I think there’s a magic in vocal harmony, in group harmony,” The Manhattan Transfer’s Trist Curless said. “There is something about it that just catches people, no matter the style … Whether it’s in a pop song, a rock song, a metal song, a reggae song, when you get to that chorus and there’s the harmony parts – everybody is drawn to that.”

The Songbook Hall of Fame celebrates lyricists, composers and performers who have helped to create the soundtrack of our lives with their contributions to American popular song. Hall of Fame inductees are selected based on factors including musical influence on other artists, length and depth of career and body of work, innovation and superiority in style and technique, and overall musical excellence. Previous inductees have included George and Ira Gershwin, Duke Ellington, Ella Fitzgerald, Johnny Mathis, Liza Minnelli, Rita Moreno and Frank Sinatra.

The Lennon Sisters, one of the most admired and longest-performing female vocal groups in American music history, are marking 67 years since their television debut in 1955 as children on The Lawrence Welk Show. Growing up in the public eye with their weekly television performances, the quartet rose to fame as acclaimed recording artists and vibrant live performers throughout the nation. They are inductees of the National Vocal Group Hall of Fame, honorees of the Hollywood Walk of Fame and the only female vocal group to have performed for seven consecutive U.S. Presidents: Eisenhower, Kennedy, Johnson, Nixon, Ford, Carter and Reagan. Following the retirement of sisters Peggy in 1999 and Dianne in 2001, the current performing sisters are original group members Kathy and Janet Lennon and their younger sister Mimi.

“After 67 years, there is still nothing like sitting on a stage, and looking at your sisters, and as we blend our voices, we just feel as one heart,” Kathy Lennon said.

The Manhattan Transfer, one of popular music’s most innovative vocal bands, is celebrating 50 years since the formation of its classic lineup in 1972. With hits including a signature arrangement of the jazz standard “Birdland,” the quartet has won 10 Grammy Awards and sold millions of records worldwide. The current lineup features original members Alan Paul and Janis Siegel; Cheryl Bentyne, who replaced Laurel Masse in 1979; and Trist Curless, who replaced founder Tim Hauser after his death in 2014.

Straight No Chaser, the men’s ensemble that has brought vocal traditions to new generations of fans, is celebrating the 25th anniversary of its founding at Indiana University. Discovered on YouTube by Atlantic Records, the group is known for tight arrangements, impeccable harmonies and a lively sense of humor. They have built a massive fan base through a series of successful album releases, many national TV appearances, and collaborations with artists including Paul McCartney, Stevie Wonder, Elton John and Dolly Parton. They consistently rank among Pollstar’s top 100 touring acts in North America.

Extended profiles, audio and video clips, and other resources on The Lennon Sisters, The Manhattan Transfer and Straight No Chaser are available at TheSongbook.org.