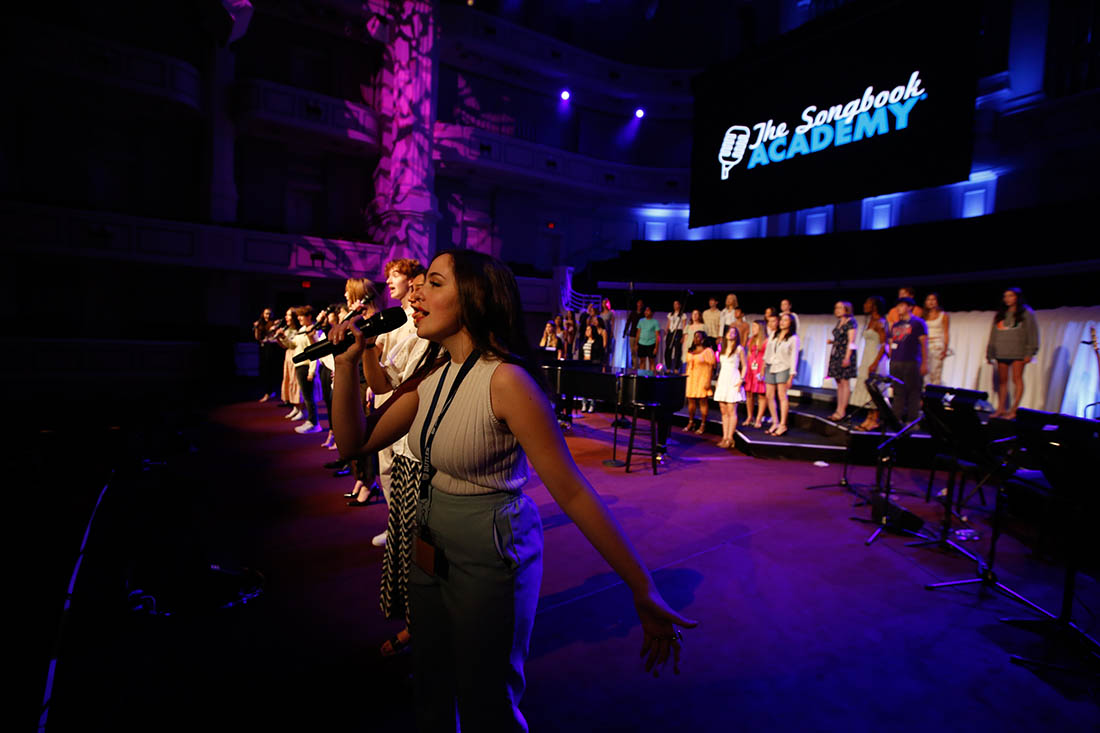 Student singers selected from across the nation rehearse for a group performance at the Palladium at the Center for the Performing Arts during the 2022 Songbook Academy, the flagship educational program of the Great American Songbook Foundation. (Wayne Images photo)

entertainment professionals for week of mentoring, lifetime of networking

CARMEL, Ind. – High school students with a passion for singing and the stage can learn directly from Broadway performers and other arts and entertainment professionals at the Great American Songbook Foundation’s annual Songbook Academy®, now accepting applications for its 14th national summer intensive July 15-22, 2023.

The Songbook Academy focuses on the pop, jazz, Broadway and Hollywood standards that have come to be known as the Great American Songbook, but the experience can be life-changing for any young person who wants to gain experience and expertise as a singer in professional or academic settings. Only 40 students nationwide are selected each year to attend the weeklong intensive at the Center for the Performing Arts in Carmel, Indiana. Alumni have gone on to perform on NBC's The Voice, on Broadway, and at Carnegie Hall and other prestigious venues.

“There’s nowhere else that you’re going to learn about music in this way,” said 2021 and 2022 participant Lydia Herrera of Kennesaw, Georgia, now studying in the renowned Department of Musical Theatre at the University of Michigan.

Through a rigorous but fun schedule of workshops, masterclasses and performances, the 40 students have opportunities to:

Although Songbook Academy originated as a judged competition with awards for top performers, it has since evolved into a format that emphasizes camaraderie and mutual support among the participants.

“Songbook Academy is the first arts experience I have had where I felt true support and that I was on a real team,” said 2022 alum Alexander Kim of Laguna Niguel, California. “I was surrounded by peers and mentors who are brilliant examples of what I can attain if I apply myself to the song.”

To be considered for the Songbook Academy, active high school students as of Jan. 1, 2023, who live in the United States are invited to submit videos with performances of two contrasting songs. Students are encouraged to select songs from the Broadway stage and the Hollywood screen as well as 20th century jazz standards. Submissions are evaluated by a national panel of music educators and industry professionals who provide written feedback to every applicant.

Candidates may apply at app.getacceptd.com/songbookacademy. The application deadline is March 26, 2023, with an early-bird discount available through Feb. 26. Need-based scholarships, fee waivers and other financial-aid opportunities are available.

The mission of the Great American Songbook Foundation, founded in 2007 by five-time Grammy® Award nominee Michael Feinstein, is to inspire and educate by celebrating the timeless standards of pop, jazz, Broadway and Hollywood. Headquartered at the Center for the Performing Arts in Carmel, Indiana, the Foundation advances this rich musical legacy by curating a vast Library & Archives of items representing its creators, performers and publishers; operating a multimedia exhibit gallery; overseeing the Songbook Hall of Fame; offering programs for the public and research opportunities for scholars and artists; and providing educational opportunities for student musicians, including the annual Songbook Academy® summer intensive. The Foundation is a Cultural Affiliate of the Los Angeles-based Grammy Museum®. More information is available at TheSongbook.org.