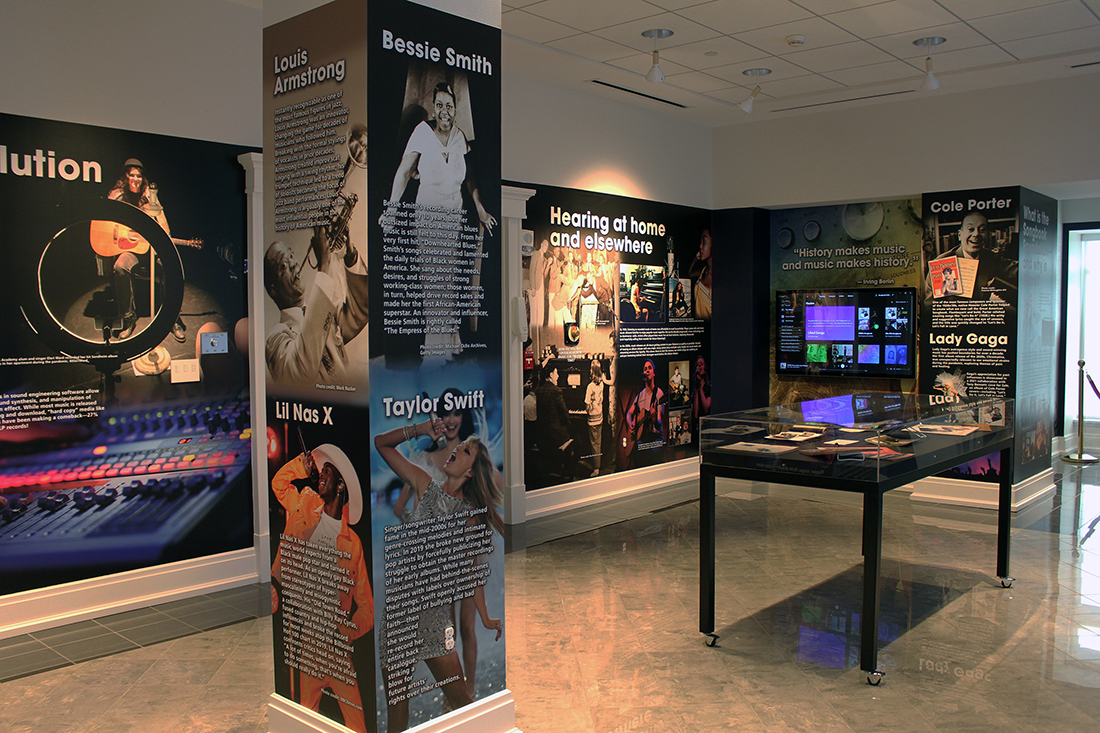 CARMEL, Ind. – The Great American Songbook Foundation’s new interactive gallery exhibit compares and contrasts the popular music and pop culture of the 1920s and the 2020s.

Now open at the Songbook Exhibit Gallery at the Palladium at the Center for the Performing Arts, From the Jazz Age to Streaming: The Soundtrack of the 20s/20s juxtaposes the two decades in terms of how music has been recorded, marketed, purchased and experienced, as well as how the music has reflected the social disparities and other trends of its time.

The exhibit also explores how changes in technology – such as the advent of electronic recording and radio in the 1920s or streaming and social media in modern times – have created space for marginalized groups to reach wide audiences. Highlighted artists include Cole Porter, George Gershwin, Louis Armstrong and Bessie Smith alongside current stars like Lil Nas X, Lizzo, Taylor Swift and Billie Eilish, as well as the rising-star alumni of the Foundation’s annual Songbook Academy® summer intensive, young performers who are just beginning their careers.

On display are artifacts from the Songbook Library & Archives, including a historic 1920s photo print of jazz pioneer Bix Beiderbecke recording at Gennett Records in Richmond, Indiana. Through a large interactive touchscreen, visitors can access music from the two eras. And using their mobile devices, visitors can respond to questions posed in the exhibit and unlock additional historical information online as well as customized recommendations and playlists for further listening.

“A key element of our mission is showing how the music and the developments of the Great American Songbook era remain relevant and influential today,” said Christopher Lewis, executive director of the Songbook Foundation. “This exhibit demonstrates that in a way that families and multiple generations of music fans can enjoy together.”

The Songbook Exhibit Gallery is open 10 a.m. to 4 p.m. weekdays via the Palladium’s west entrance, as well as for one hour preceding the Center for the Performing Arts’ Songbook and Jazz series performances at the Palladium. More information is available at TheSongbook.org or (317) 844-2251.

In conjunction with the new topical exhibit, the Songbook Foundation is converting one corner of the gallery into a standing display on the Foundation’s history and mission. The centerpiece of this area is a Grammy Award and a 1931 upright piano owned by late songwriter Harold Arlen, whose hits included “Get Happy,” “Stormy Weather” and “Over the Rainbow,” named the top American song of the 20th century by the Recording Industry Association of America and the National Endowment for the Arts. Donated to the Foundation by Arlen’s family, the instrument recently underwent conservation work by technicians at Piano Solutions in Carmel.

From the Jazz Age to Streaming: The Soundtrack of the 20s/20s is made possible through the generous support of Avison Young, the National Endowment for the Arts and the City of Carmel.