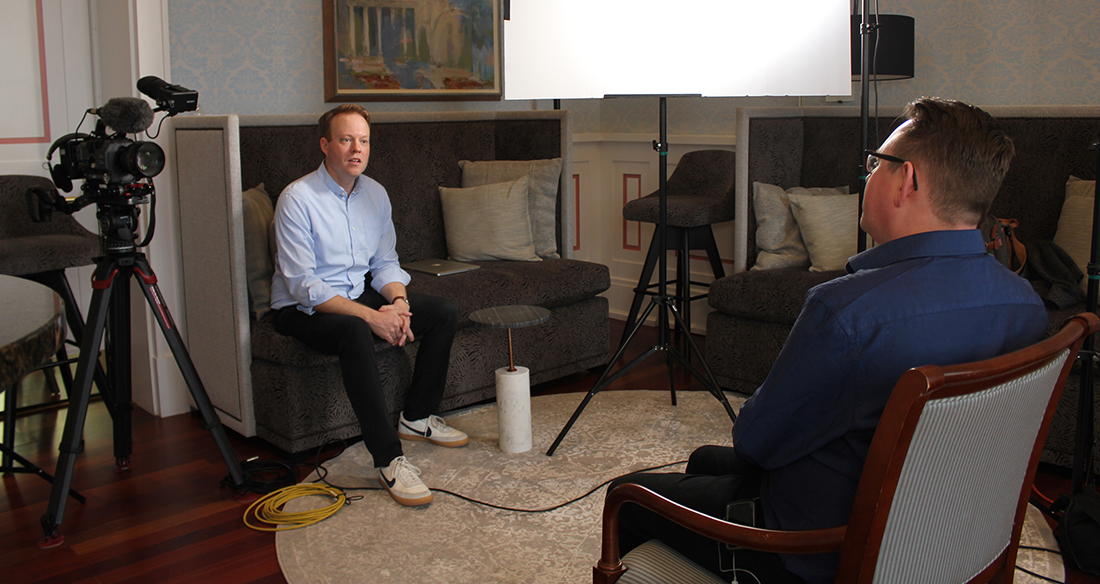 Producer-director Tyler Brinegar of Iowa PBS interviews musicologist and author Dominic Broomfield-McHugh in early April at the Great American Songbook Foundation's headquarters in Carmel, Indiana. The Foundation's Songbook Library & Archives holds a one-of-a-kind collection of items from Meredith Willson, creator of the classic musical "The Music Man," who is gaining attention for his many contributions to American culture.

The late Meredith Willson, a prolific but somewhat unexamined figure in 20th century entertainment, is gaining new attention these days from multiple directions:

A common thread in all three projects has been the need for research in the Great American Songbook Foundation’s Songbook Library & Archives. The Indiana-based nonprofit foundation is dedicated to preserving the history – and demonstrating the continuing relevance – of America’s timeless popular music. Its historical collections hold more than a half million items representing the performers, composers, lyricists, arrangers and other artists behind those beloved pop, jazz, Broadway and Hollywood standards that still resonate today.

Among the most extensive collections is the Meredith Willson Papers, with contents including original photographs, personal and business correspondence, sheet music, arrangements, and audio and visual recordings from the musician-broadcaster-playwright’s personal collection. Entrusted to the Foundation in 2012 by the Meredith and Rosemary Willson Charitable Foundation (now The Music Man Foundation), the materials will play a key role in a one-hour documentary with the working title Meredith Willson: America's Music Man, set to premiere early next year on Iowa PBS and aimed for national distribution through public broadcasting networks.

Iowa PBS producer-director Tyler Brinegar says the concept of a Willson documentary has floated around for at least two decades, but only recently have two key pieces fallen into place: funding to secure the necessary music and film rights, and the availability of the Willson collection as catalogued and preserved by the Songbook Foundation.

“For a documentary film to have photos and letters and sheets of music in his own handwriting, that’s just invaluable,” says Brinegar, who spent last week in the archives poring over files, scanning images and conducting interviews. “If that stuff didn’t exist, I think I would have been skeptical about doing this from the beginning … Without it, we’d just have a Wikipedia page in film form.”

Revisiting the archives alongside Brinegar’s crew was one of the expert sources for the film, Dominic Broomfield-McHugh, Professor of Musicology at the U.K.’s University of Sheffield. Broomfield-McHugh has been collaborating with the Songbook Foundation since it first acquired the Willson collection, and last year he published what is arguably the most comprehensive book ever written on the man’s life and work, The Big Parade: Meredith Willson's Musicals from The Music Man to 1491.

A December article in The New York Times highlighted some of Broomfield-McHugh’s discoveries in the Songbook Archives, including early drafts of TMM with previously unknown songs and characters that never made the final cut.

“This book would never have happened without the Meredith Willson collection here, and without it being made available so easily and with everyone being so helpful,” says Broomfield-McHugh, who also has written books about Cole Porter, Alan Jay Lerner, My Fair Lady and other subjects. “The collection contains every aspect of Willson’s life, from his childhood to his final years when people were paying tribute to him.”

“Our ultimate goal is always to make the materials in the Songbook Library & Archives available and accessible,” Lewis says. “Simply cataloging and preserving these items is not sufficient if people can’t see and learn from them. We are honored to be the stewards of the Willson collection, and it has been exciting to see the interest in this particular collection grow in recent years.”

Born in 1902, Willson began his wide-ranging career as a young flutist for Sousa and Toscanini, found success as an NBC bandleader in the golden age of radio, composed scores for Hollywood films such as Charlie Chaplin’s The Dictator, and wrote popular songs including “It’s Beginning to Look a Lot Like Christmas.”

“If he had just done The Music Man, I don’t think there would have been much of a story,” Brinegar says. “But the fact is, The Music Man was really the pinnacle of a 30-year career in music.”

Prior to visiting Indiana, Brinegar and Broomfield-McHugh spent a few days in New York City, reviewing some Willson manuscripts at the Juilliard School and interviewing Broadway figures with connections to his work, including EGOT-winning orchestrator Jonathan Tunick, who worked on the current TMM revival; Tony-winning director and choreographer Susan Stroman, who led a 2000 revival; and Tony-winning actor John Cullum, age 92. Cullum was the male lead in 1491, which closed quickly and never premiered on Broadway.

“He felt that he let Meredith down by not carrying it to Broadway,” Brinegar says, “but if (Willson) was disappointed, he didn’t show it, because that’s the kind of guy he was.”

Both researchers agree that the emerging picture of Willson shows a humble, generous and hardworking artist, who launched into musical theater work in his 50s when he could have retired comfortably in Beverly Hills.

“With The Music Man, everybody assumes, well, he woke up one day and wrote about his childhood, and from what we can tell from the Songbook collection, that’s not the case – this was a tough process,” Brinegar says. “Over four or five years, not only did he not give up, but he reinvented over and over again to get it across the finish line, so much so that some of the songs we know the most came in pretty late in the process.”

Reconstructing the process behind classic musicals is what interests scholars like Broomfield-McHugh, and why he has traveled so many times from Britain to Carmel, Indiana.

“That’s the real value of the archives here more broadly, is that it documents the process of making the Songbook happen,” Broomfield-McHugh says. “I’m in my element when I’m in the Songbook Archives.”