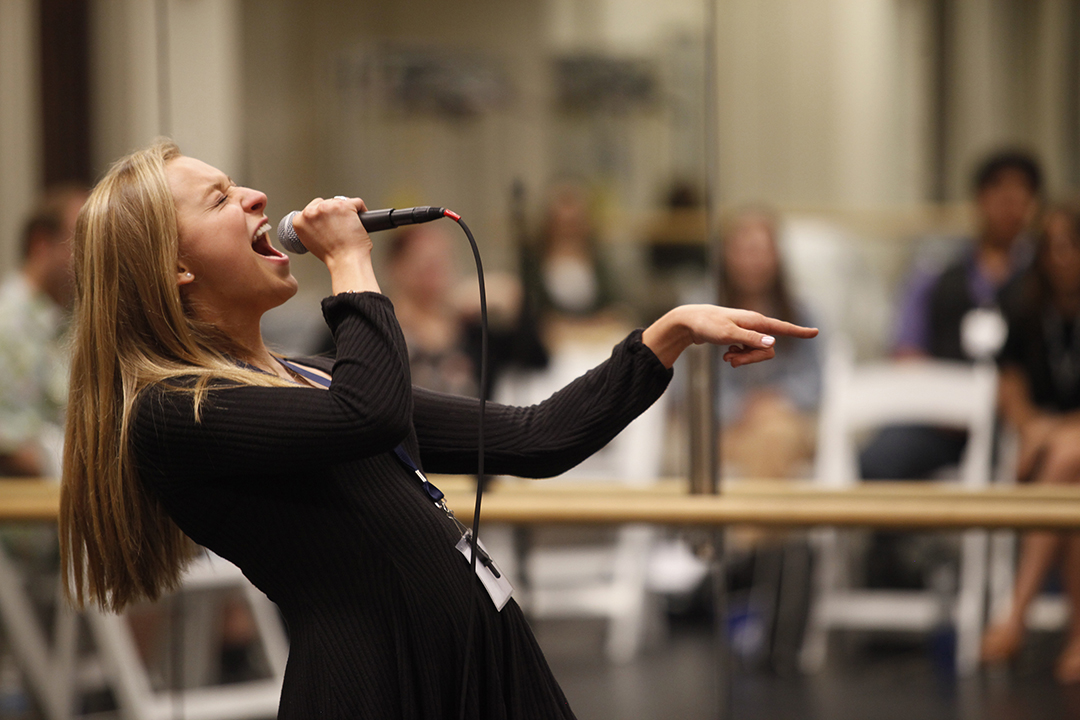 Finalist Anja Reese of Carmel sings during a workshop at the 2017 Songbook Academy.

CARMEL, Ind. – U.S. high school singers with interests in musical theater, jazz and classic popular music can apply now to experience a life-changing week of performances, pre-professional training and personal mentoring from Broadway stars and other arts and entertainment professionals.

The Great American Songbook Foundation has opened the application process for its 13th annual Songbook Academy® national music intensive, taking place July 16-23, 2022, at the Foundation’s home, the Center for the Performing Arts in Carmel, Indiana. Candidates may apply at getacceptd.com/songbookacademy. The 2022 event will mark a return to an in-person, on-site gathering after two years in an online format prompted by health concerns.

“We’ve learned that the Songbook Academy has a major impact on the participants regardless of format, but needless to say, we’re very pleased to offer this year’s finalists the special camaraderie and sense of community that come from spending the week together in shared spaces,” said Christopher Lewis, Executive Director of the Great American Songbook Foundation.

Only 40 students nationwide are selected each year to experience a lively and rigorous schedule of workshops and masterclasses on topics such as vocal technique, vocal health, song interpretation, phrasing, stage presence, music history, business concerns and auditioning for college arts programs. Participants build relationships with peers and pros, perform before live audiences and join the Songbook Academy Alumni Network to stay connected and informed about college programs, auditions and performance opportunities.

Heading up the roster of professional mentors, as always, will be Songbook Foundation Founder Michael Feinstein, the five-time Grammy-nominated “Ambassador of the Great American Songbook.” The 2022 guest mentors are still to be announced; last year’s included Grammy-winning vocalist Catherine Russell and stage and screen stars Telly Leung and Solea Pfeiffer.

The week culminates in the Songbook Academy Finals, a performance presented by the Center for the Performing Arts in the 1,600-seat Palladium concert hall. Awards are presented for excellence in several categories, and many finalists receive national performance opportunities.

Songbook Academy alumni include Maddie Baillio (2014), who appeared in NBC’s Hairspray Live!, Netflix’s Dumplin’ and the recent film adaptation of Cinderella; Anaïs Reno (2018), a rising star on the New York City jazz scene; and Melinda Rodriguez (2013) and Julia Cooper (2016), who have competed in recent seasons of NBC’s The Voice.

The application deadline is March 15, 2022, with an early-bird discount available through Feb. 15. Need-based scholarships, fee waivers and other financial-aid opportunities are available.