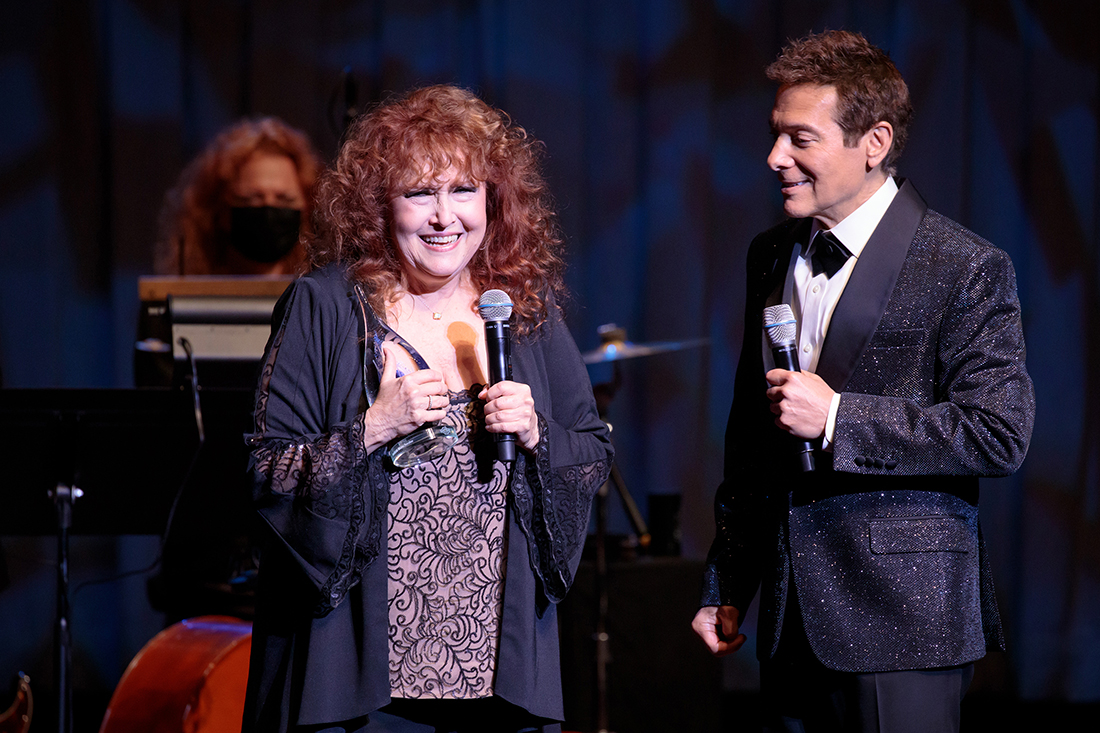 Singer-songwriter Melissa Manchester (left) reacts after receiving the Songbook Hall of Fame award from Great American Songbook Foundation Founder Michael Feinstein in May at the Palladium at the Center for the Performing Arts. Photo by William Crawford, Harbor Pictures Company.

CARMEL, Ind. – Legendary lyricist Sammy Cahn, singer-songwriter Melissa Manchester and composer-arranger Billy Strayhorn will be honored in an upcoming online event as the 2021 inductees to the Great American Songbook Hall of Fame.

In addition to the video induction, the Foundation will unveil new opportunities at TheSongbook.org for viewers to continue celebrating and learning about the musical legacies of this year’s Hall of Fame inductees. Videos and interactive learning opportunities will include bassist-composer Marlon Martinez’s Strayhorn Sundays; Songbook Academy masterclass moments with Manchester; a peek at the Emmy Award won by Cahn and frequent collaborator Jimmy Van Heusen for “Love and Marriage,” courtesy of Van Heusen’s great nephew Brook Babcock; music playlists and more.

The program is free to view. For event reminders and viewing links, register at bit.ly/2021SongbookHOF.

The Songbook Hall of Fame celebrates composers, lyricists and performers who have created the soundtrack of our lives with their contributions to American popular music. Hall of Fame inductees are selected based on factors including musical influence on other artists, length and depth of career and body of work, innovation and superiority in style and technique, and overall musical excellence. Previous inductees have included Cole Porter, George and Ira Gershwin, Nat King Cole, Ella Fitzgerald, Frank Sinatra, Liza Minnelli and Rita Moreno.

Cahn put words to some of the best-known popular songs of all time, including “Come Fly with Me,” “Love and Marriage,” “My Kind of Town,” “The Second Time Around,” “Let It Snow! Let It Snow! Let It Snow!” and hundreds more. His work was recorded by virtually every major singer of his era, most notably Frank Sinatra but also Bing Crosby, Dean Martin, Doris Day and many others. His songs for film earned him more than 30 Academy Award nominations and four wins.

A songwriter since her teen years, Manchester was a backup singer for Bette Midler before scoring her first Top 10 hit in 1975 with “Midnight Blue.” In 1980, she became the first recording artist to have two Academy Award-nominated movie themes in a single year, “Through the Eyes of Love” from Ice Castles and “I’ll Never Say Goodbye” from The Promise, and performed them both on the Oscar telecast. She received a 1980 Grammy nomination for “Don’t Cry Out Loud” and claimed the 1982 Best Female Vocalist award for “You Should Hear How She Talks About You.” Feinstein presented the Hall of Fame award to Manchester in May during a joint performance at the Songbook Foundation’s headquarters, the Palladium at the Center for the Performing Arts.

Originally a classical pianist, Strayhorn joined Duke Ellington’s big band in 1939 and spent three decades as a composer, arranger and the bandleader’s closest collaborator, though he was not always credited. His compositions included Ellington’s theme, “Take the ‘A’ Train,” as well as “Chelsea Bridge,” “Lush Life” and other classic songs. In 1960, Strayhorn and Ellington collaborated on The Nutcracker Suite, featuring jazz adaptations of Tchaikovsky’s The Nutcracker.