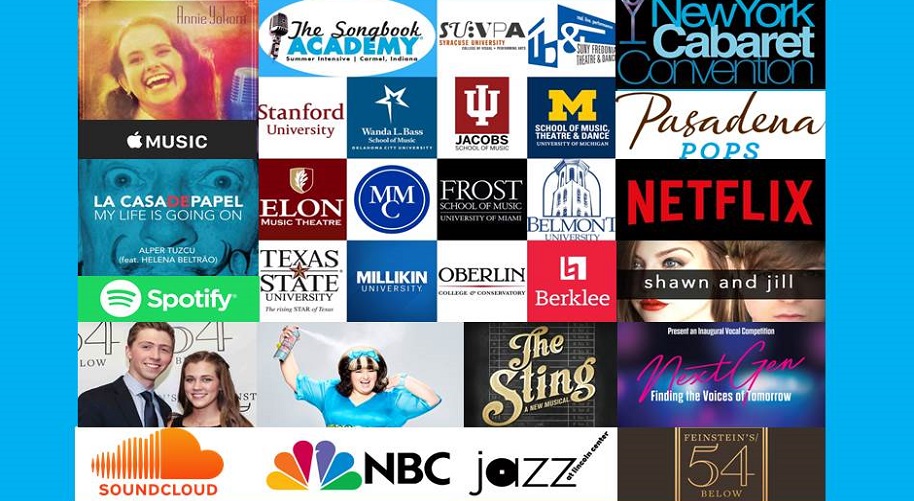 Whether they've gone on to star on NBC's The Voice or are currently students at university performing arts programs you are interested in attending, this is your chance to network and engage with Songbook Academy alums from our 12-year network!

From NBC to Broadway - Alumni Highlights

Anaïs Reno (2018 Songbook Inspiration Award) is a 17-year old Drama major at LaGuardia High School for the Performing Arts who has already been featured in The New York Times as one of the leading singers in the next generation of Cabaret showstoppers and was the "Editor's Pick" for The Best New Jazz Albums of 2021. Listen to her new album feat. the Emmet Cohen Trio here. Anaïs was recently named an Ella Fitzgerald Charitable Foundation scholar.

Eleri Ward (2012) just released a new album A Perfect Little Death which reimagines 13 songs by musical theatre composer Stephen Sondheim through the lens of indie-pop performer Sufjan Stevens, a project that emerged after Ward went viral on TikTok with her Stevens-inspired rendition of "Johanna (Reprise)" from Sweeney Todd. Check her out on Playbill!

Julia Cooper (2016) made it to the Top 20 on Team Legend during Season 19 of NBC's The Voice. Watch her blind audition here. Recently, she released her singles "When We First Met" and "Alaska".  Listen on all platforms!

Finn Sagal (2017), currently at UCLA's Herb Alpert School of Music, has become a notable TikTok star @finnandalex by performing Songbook standards in daily videos during the pandemic. He also participated in The Buffalo Philharmonic Orchestra and Buffalo Philharmonic Chorus which won a GRAMMY for Best Choral Performance this year!

Johnny Rabe (2018) has performed on and off Broadway since the age of 10! Johnny's credits range from Ralphie in the Broadway company, Tony Award performance and national tour of A Christmas Story to his recentOff-Broadway appearance in Contact High: A New Musical. He is currently pursuing a double major in Music and International Relations at Stanford University where he performs with The Stanford Mendicants. Check out a recent solo from their upcoming album!

Julia Goodwin (2013) recently released her new single, "Get Me, Got You" - listen here! Julia has performed on stages from Carnegie Hall to Jazz at Lincoln Center and was a quarterfinalist on NBC’s “America’s Got Talent”. She recently graduated from Syracuse University, majoring in Music Industry with a concentration in Jazz Commercial studies, and released her her Christmas time classic “Home for The Holiday" in 2019.

Tyler Huckstep (2010), a graduate from University of Cincinnati, was cast in the world premiere of “The Sting” with Harry Connick, Jr. at Papermill Playhouse, and performed on the national tour of “Shrek: the Musical”. Listen to him sing at Broadway Sessions in 2015!

Nick Ziobro (2012) is an equity actor, singer, and pianist who is based in New York City. Nick has appeared recently on Seth Rudetsky's ever-popular Stars in the House, Jim Caruso's Pajama Cast Party!, and with Symphoria's Pops Series (catch his pre-concert chat with fellow Songbook Academy alumna Julia Goodwin!)

Merissa Beddows (2014), currently pursuing her Bachelor of Music at the Curtis Institute of Music, was the first place winner in the Hal Leonard Art Song competition in 2020.  Since the start of the pandemic, Merissa has become an influencer Tiktok amassing over 700,000 followers, "with her operatic take on current TikTok" trends." - Lyric Opera of Chicago. Visit her website or follow her @merissaria.

Annie Yokom (2010 Songbook Youth Ambassador) released her single “It’s a Good Day” in June 2018. Annie is part of a duo with her talented brother Charlie. Check out their videos here!

Jillian Slade (2010 & 2012) is part of an Acoustic pop/folk duo “Shawn and Jill” with with penetrating vocals and infectious melodies fashioned from the fabrics of Folk, Soul, Pop, and hints of R&B. They released their EP “The Beginning” in April of 2018.

Nia Savoy (2015) was the winner of the 2018 AmericanPops inaugural NextGen: Finding the Voices of Tomorrow Competition. Nia has also been involved in YoungArts - check out her 2015 performance here!

Helena Beltrao (2016), a graduate of Berklee College of Music, was featured on Alper Tuzcu’s cover of “La Casa De Papel” which was released on Spotify. Growing up in both Brazil and the US, Helena's unique musicality blends Bossa Nova and MPB (Brazilian Popular Music) in Brazil to Jazz, Blues and Pop in the United States.

Gabe Schonman and Wilson Smith (2018 and 2017) currently perform together and music direct the popular vocal group, Radius, a 7 person professional male a cappella group from across the country, i.e. "a cappella's favorite boyband!" @radiusvocals. Gabe Schonman, currently at Frost School of Music at the University of Miami, also started The Music Avenue podcast with special guests like Michael Feinstein and New York Voice's Lauren Kinhan.

Joie Bianco (2016 & 2017) currently attends Frost School of Music at the University of Miami. As a high school student she performed at the 2017 New York Cabaret Convention, released a demo “Raggy Waltz/Take5” on Soundcloud, and was the winner of the 2017 Julie Wilson Award.

Grace Wipfli (2012, 2013), who graduated with a Master of Music in Voice and Opera Performance from the Bienen School of Music at Northwestern University, is the Soprano Resident Artist for Toledo Opera’s 2020-2021 season. Having performed from Hawaii to Carnegie Hall, she received an Encouragement Award from The Metropolitan Opera National Council Auditions. Visit her website.