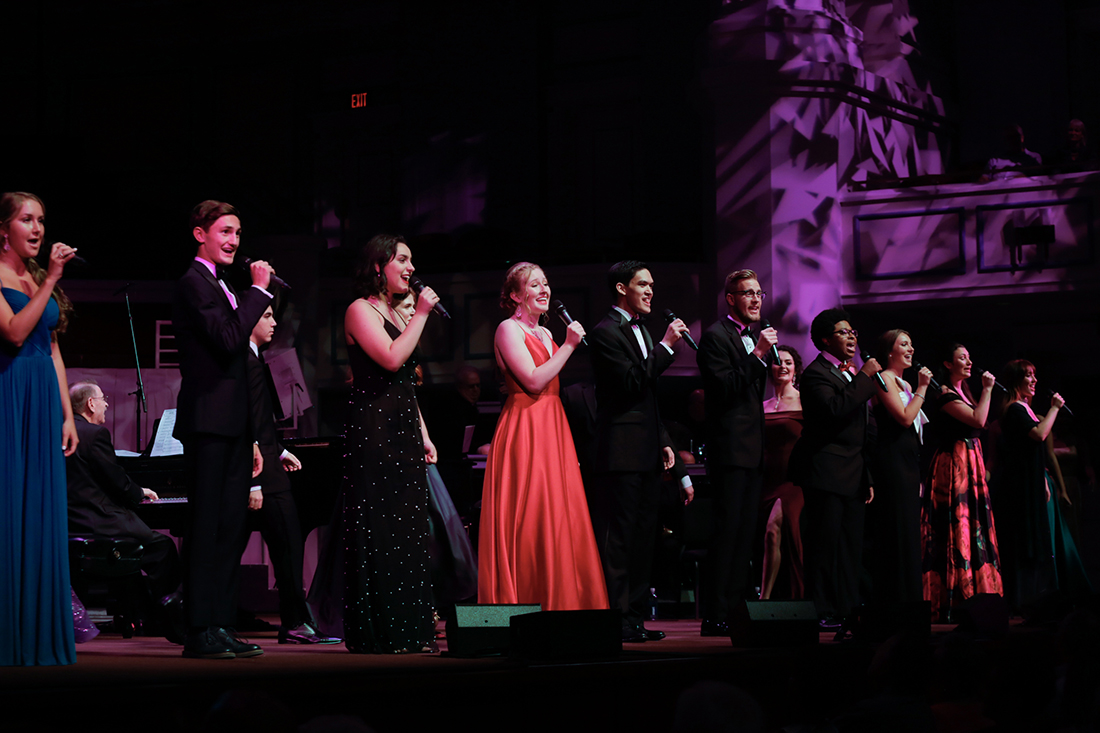 After two years as a virtual gathering, the Songbook Academy will be conducted in person this year at the Center for the Performing Arts, complete with performances at the Palladium.

CARMEL, Ind. – After two years in a virtual format due to pandemic concerns, the national Songbook Academy® summer music intensive is returning this year to its roots as an on-site, in-person gathering for some of the nation’s finest high school vocalists.

The Great American Songbook Foundation has extended its application deadline to March 25 for teens with interests in musical theater, jazz and classic popular music who want to experience a life-changing week of performances, pre-professional training and personal mentoring from Broadway stars and other arts and entertainment professionals. Songbook Academy 2022 will take place July 16-23 at the Foundation’s home, the Center for the Performing Arts in Carmel, Indiana. Candidates may apply at getacceptd.com/songbookacademy for one of the 40 available positions at the Academy.

“Thanks to technology, we’ve continued to provide a rich experience for our finalists over these past two years, but there is a special sense of camaraderie and community that comes from a full week of living, learning and singing together,” said Christopher Lewis, Executive Director of the Great American Songbook Foundation. “We’re excited once again to create that environment for these talented young people.”

Heading up the roster of professional mentors, as always, will be Songbook Foundation Founder Michael Feinstein, the five-time Grammy-nominated “Ambassador of the Great American Songbook.” The 2022 guest mentors are still to be announced; last year’s included Grammy-winning vocalist Catherine Russell and stage and screen stars Telly Leung and Solea Pfeiffer.

The week culminates in the Songbook Academy Finals, a performance presented by the Center for the Performing Arts in the 1,600-seat Palladium concert hall. Awards are presented for excellence in several categories, and many finalists move on to professional performance opportunities across the nation.

Songbook Academy alumni include Maddie Baillio (2014), who appeared in NBC’s Hairspray Live!, Netflix’s Dumplin’ and the recent film adaptation of Cinderella; Anaïs Reno (2018), a rising star on the New York City jazz scene; and Melinda Rodriguez (2013) and Julia Cooper (2016), who have competed in recent seasons of NBC’s The Voice.

The new application deadline is March 25. Need-based scholarships, fee waivers and other financial-aid opportunities are available.

The mission of the Great American Songbook Foundation, founded in 2007 by five-time Grammy® Award nominee Michael Feinstein, is to inspire and educate by celebrating the timeless standards of pop, jazz, Broadway and Hollywood. Headquartered at the Center for the Performing Arts in Carmel, Indiana, the Foundation advances this rich musical legacy by curating a vast Library & Archives of items representing its creators, performers and publishers; operating a multimedia exhibit gallery; overseeing the Songbook Hall of Fame; offering programs for the public and research opportunities for scholars and artists; and providing educational opportunities for student musicians, including the annual Songbook Academy® summer intensive. The Foundation is a Cultural Affiliate of the Los Angeles-based Grammy Museum®. More information is available at TheSongbook.org.